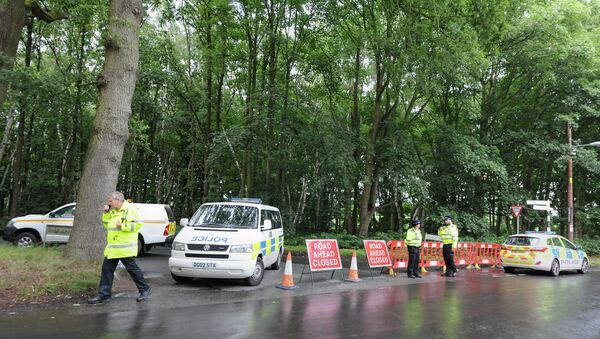 © AP Photo / Rui Vieira
Subscribe
A fighter plane crashed during an aerial show in the UK, killing its pilot.

Small Plane Lands on New Jersey Highway
MOSCOW (Sputnik) — A pilot was killed when a fighter aircraft crashed during an aerial show in the United Kingdom, the organizer of the event told reporters Saturday.

"There was a tragic accident, the result of which was that one of the pilots involved in a synchro display lost his life. Our condolences go out to his family, who have been informed," Chris Evans, the British radio and TV presenter was quoted as saying by The Guardian.

A Gnat private display team jet was performing a display routine when it went into a steep dive and crashed. According to preliminary data, a fighter pilot lost control of the vehicle, the newspaper reported.

The Heritage Aircraft Trust, operator of the Gnat Display Team is very sad to announce the loss of one of its display…

The CarFest event, during which the tragedy occurred, began on Friday and is due to continue until Sunday. Following the incident, the organizers decided not to interrupt the festival, Evans added.

This was the scene seconds after the plane crashed during a display at CarFest. pic.twitter.com/XU2uvG63hU

"We do not believe that any other person has been harmed in the incident. We are working very closely with the police, emergency services and all relevant authorities. We have helpfully received images and footage captured by those close to the site, which will aid with the police investigation," the CarFest said in a statement.

Evans stressed that a more detailed and comprehensive statement would be issued later.