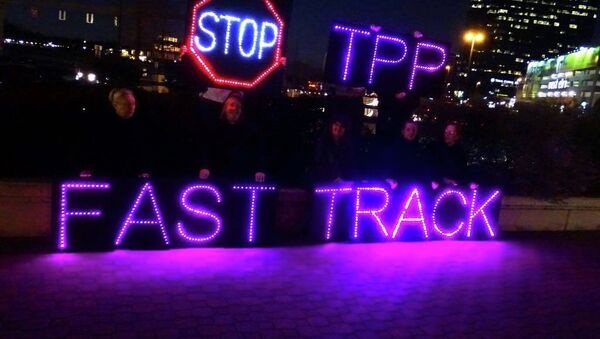 High-level talks in Hawaii failed to lead to the conclusion of a Trans-Pacific Partnership trade deal.

"The sad thing is, it’s 98% concluded," Australia’s Minister for Trade and Investment Andrew Robb said as quoted by the newspaper late on Friday.

The Wall Street Journal said that some of the reasons behind the failed talks are remaining disputes over dairy and automobile trade as well as the protection of cutting-edge biologic drugs.

Pacific Rim trade ministers, who gathered on the Hawaiian island of Maui on July 28-31 said they would continue to seek an agreement before the end of the year, but did not specify the dates of future meetings.

Leaked TPP Doc Reveals 'One Size Fits All' Plan to Boost Multinationals
The TPP deal is geared toward securing commercial agreements between the United States and 11 other nations, including Australia, Japan, New Zealand, Mexico, Taiwan, South Korea, and Malaysia. The deal is expected to cover about 40 percent of the global economy.

TPP critics point to its uncertain implications for rights, employment relations and the environment.

The Obama administration argues that the new trade deal will allow Washington to shape the international economy to benefit US interests and balance out China’s influence in the Asia-Pacific region.

In June, US President Barack Obama signed a bill empowering him to conclude any trade agreements using a simplified scheme. This applies to the TPP, which concerns Pacific Rim countries but excludes China and Russia.