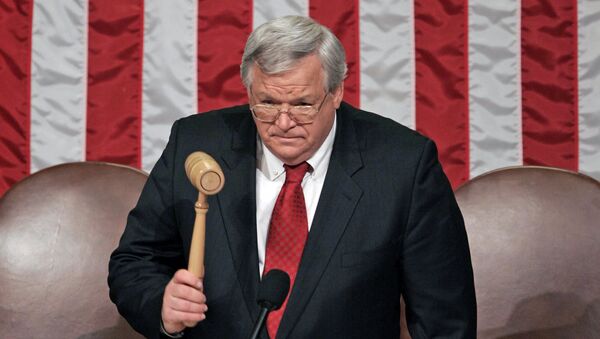 A defense fund for embattled former speaker of the US House of Representatives Dennis Hastert has been established ahead of trial for a series of illicit cash withdrawals, local media reported Friday.

MOSCOW (Sputnik) – In a Federal Election Commission report filed late Thursday and disclosed by the Politico website, Hastert donated $10,000 to the J. Dennis Hastert Defense Trust from his political action committee (PAC), which he terminated on June 30.

Hastert, 73, who served as speaker in 1999-2007, entered a not guilty plea last month to charges of lying to the Federal Bureau of Investigation (FBI).

Prosecutors allege he withdrew $1.7 million in cash from various bank accounts in increments of less than $10,000 to evade the filing of Currency Transaction Reports.

When questioned by the FBI, Hastert reportedly had said he made the withdrawals because he didn’t trust the US banking system. Hastert’s indictment, however, alleges he agreed to pay $3.5 million to a longtime associate to keep alleged sexual misconduct accusations under wraps.

Hastert’s trial date is yet unknown, while defense motions challenging the charges and seeking evidence for a trial are due by August 31.