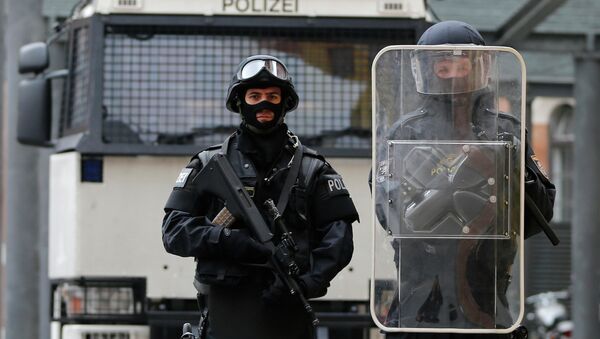 Nine US marines with undeclared assault rifles were detained in Vienna en route to Ukraine.

Austria Should Sanction US After Incident With Armed Soldiers - Lawmaker
MOSCOW (Sputnik), Anna Liatsou — Austrian police regard the recent incident with a group of armed US soldiers who were stopped on their way to Ukraine at a Vienna airport as a serious issue, an officer at a police department in Lower Austria told Sputnik on Thursday.

"It is a very important thing, but I can’t tell you why we stopped them," the officer said.

The US military personnel had undeclared M16 assault rifles and pistols concealed in their travel bags, Austrian media reported. They did not have permits to carry weapons.

According to the police source, several soldiers were on a journey from Rome to Ukraine.

"They did not arrive on time to the airport and the airplane had already left," he explained.

Armed US Soldiers Arrested in Vienna Airport on Their Way to Ukraine
Austrian Defense Ministry spokesman Colonel Michael Bauer was quoted by the Kurier newspaper as saying on Wednesday that the US servicemen had encountered a problem with making a connecting flight and had left the transit area in order to rebook.

They were detained and put on a flight destined for Washington, together with their weapons.

Washington has backed Ukraine in its fight against independence supporters in the country’s southeast, although it said that US support would be limited to training and non-lethal aid.