Senior US Official Assures Turkish Troops to Stay Out of Syria 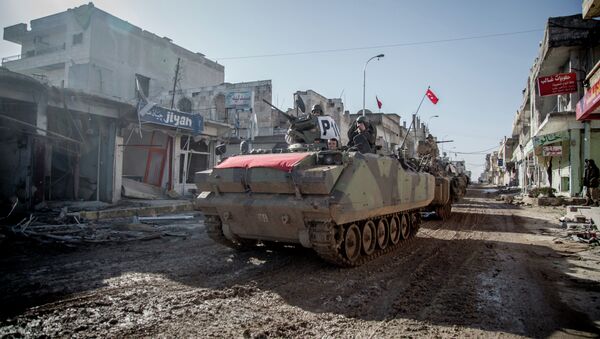 © AFP 2023 / DEPO PHOTOS / MURSEL COBAN
Subscribe
International
India
Africa
A senior US official claims that the creation of a safe-zone along an ISIL-controlled border area with Turkey will rely on moderate Syrian rebels, and will not involve Turkish ground troops.

WASHINGTON (Sputnik) — The creation of a safe-zone along an ISIL-controlled border area with Turkey will rely on moderate Syrian rebels, and will not involve Turkish ground troops, a senior US official said during conference call with journalists.

“This is not going to involve, as Turkey has said, Turkish soldiers. There’ve been rumors… that is not the case,” a senior US official said. “It is going to involve moderate opposition groups on the ground that can manoeuvre, that we can coordinate with, that we can work with to fight Daesh [ISIL].”

US and Turkish officials are still working out the details of a plan to clear the Islamic State from a 68-mile-stretch of along the Turkish border, the senior official said.

US Set to Deploy More Troops, Combat Aircraft to Turkey
The plan would cut off outside supply routes for Islamic State after Syrian Kurdish fighters, backed by US airstrikes, have pushed the terrorist group from a large stretch off the Turkish border.

“We have agreed to sit down with them [Turkey] and look at ways that we might be able to organize moderate opposition fighters in coordination with us and the coalition to clean out this last stretch of border,” the senior official explained.

Turkey’s decision to open up Incirlik airbase will provide the US-led anti-Islamic State coalition greater logistical access to carry out airstrikes in Syria as well as gather intelligence.

The creation of a safe-zone comes as Turkey has bombed since last week Kurdistan Workers’ Party (PKK) guerrillas in Iraqi Kurdistan in retaliation for attacks on Turkish security forces.

The airstrikes and resumption of conflict between the PKK and Turkey is a complicating factor in US plans to destroy the Islamic State as the Syrian Kurds, supported by the United States, are close to the PKK.