Wake-Up Call: US Has Fewer Black Reporters Now Than it Did in 1968 © Flickr / Valerie
Subscribe
International
India
Africa
The number of African-Americans in US newsrooms, which have long slammed the lack of black representation in Congress, on Wall Street and on the boards of US corporations, has not only not grown since the height of the Civil Rights Movement, when black journalists accounted for “less than 5 percent” of the workforce, but may have in fact decreased

The trend in US journalism, which experts call "alarming," indicates that the profession may be even more unequal in terms of employment opportunities than it was at the time of Civil Rights Activist Dr. Martin Luther King Jr.'s assassination.

A new report by the Columbia Journalism Review, together with data from the American Society of News Editors, shows that only 4.78% of newsroom staff across the US is African-American, the Washington Examiner reported. In 1968, President Lyndon Johnson's National Advisory Commission on Civil Disorders put that number at "less than five percent."

Alex T. Williams, who authored the CJR report, says the numbers look a bit different when all US minorities are taken into account.

"The percentage of minorities employed in daily newspapers (the ASNE looks at black, Hispanic, Asian American, Native American, and multiracial populations) has increased from 3.95 percent in 1978, when the ASNE began conducting the census, to 13.34 percent in 2014. The Radio Television Digital News Association estimates that in 2014, minorities made up 13 percent of journalists in radio and 22.4 percent of journalists in television," Williams wrote.

"Still, these figures are a far cry from the 37.4 percent of Americans that are minorities," Williams stressed.

Figures for journalists working in the US capital are similar: American Urban Radio Networks' White House correspondent April Ryan told the Examiner earlier this year that only around 10 percent of reporters who frequent the White House are African-American.

"I've come out of that lower press room door, past the podium, or walked by and looked into that crowd. It shocks me sometimes. I'm like, 'Wow!'," said Ryan, the author of the book The Presidency in Black and White.

Other figures in the report suggest it's not about education: around 24.2% of those studying journalism or communications at major US universities are minority students, and they account for around 21% of graduates from journalism and communications programs, the Examiner reported.

Here's the thing: only 49% of those minority graduates land jobs in their field, whereas the number of white journalism program graduates who find journalism jobs amounts to around 66%. 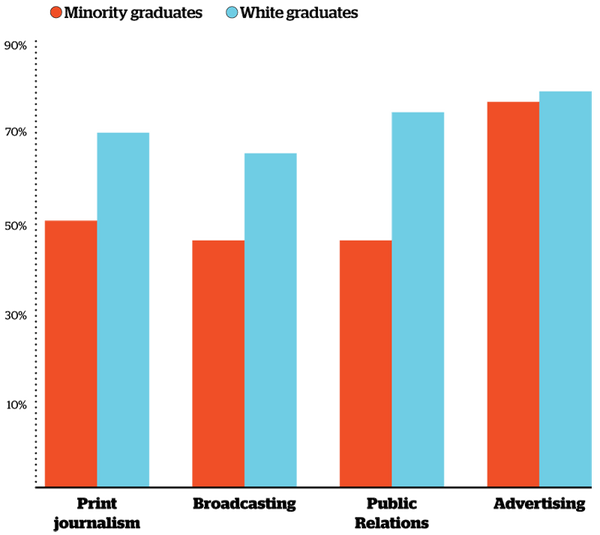 Williams urges the nation's news business to open up their hiring practices to be more inclusive of minority talent.

In 1968, President Johnson's commission wrote: "The media report and write from the standpoint of a white man's world… fewer than 5 percent of the people employed by the news business in editorial jobs in the United States today are Negroes."