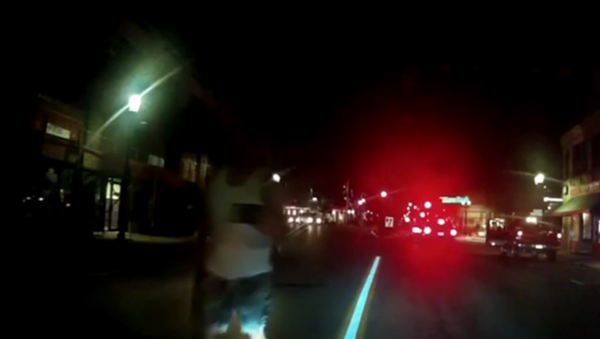 A video of an incident involving an out-of-control off-duty Massachusetts police detective uploaded to social media has forced the Medford Police Department to put the detective on paid administrative leave after repeatedly threatening to shoot another motorist.

Miami Beach Cop Won’t Face Charges Over Graffiti Artist’s Death by Taser
Detective Stephen Lebert was off duty when he got out of his vehicle and began threatening another driver who had mistakenly made a wrong turn going through a traffic circle.

"I'll put a hole right through your head," Lebert threatens as he approaches the man’s vehicle.

"You are lucky I am a cop or I'd beat the (expletive) out of you right now," he continues.

The video, taken from the driver’s own dashcam, was uploaded to social media on Sunday; an inaccurate time stamp reads that it was filmed on July 28.

The driver initially tried to reverse to get away from Lebert, until he noticed the detective was holding a badge.  He then began apologizing repeatedly for his driving mistake.  That did not seem to calm the enraged officer, however, as he continuously threatened and yelled at the motorist.

"I am troubled by what I have seen on the video," Medford Police Chief Leo Sacco told WCVB. "I was upset to see one of my officers involved in this kind of activity."

Eventually, Lebert called some of his coworkers to the scene, and they are shown in the video handling the situation calmly.

“He was super aggressive at me, he was yelling and he jumped out of his truck and he yells that he’s going to blow my brains out, and so I got scared,” the driver says to the officers who arrived on the scene.

“I threw it in reverse, I’m like, What the hell’s going on — I don’t know this guy, you know. He’s got tattoos, he’s got a wife-beater. Where I’m from — I grew up in Lowell, Massachusetts — that’s a rough area. When someone says they’ve got a gun, they usually got a gun,” the driver explains.

The back-up officers did not arrest their colleague, and instead cited the driver for outdated registration stickers and told him he would receive a summons in the mail.