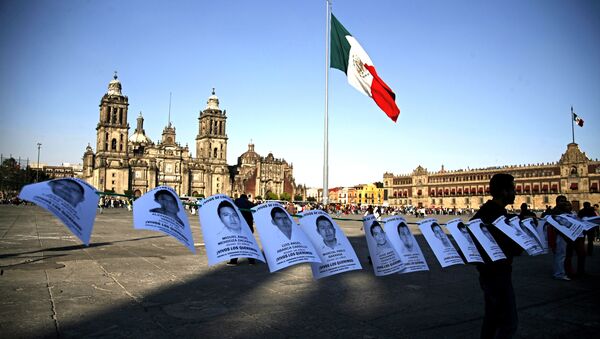 MOSCOW (Sputnik) – The discovery of 129 bodies in scores of secret graves in southwest Mexico highlights the scope of forced disappearances that plagues the country, an international watchdog said in a press release.

Mexico’s attorney general’s office disclosed in a freedom of information request on Sunday that a search for 43 missing students in the state of Guerrero had turned up 129 bodies buried in 60 unmarked graves.

"This latest macabre revelation confirms what we had already found: the sheer magnitude of the crisis of enforced disappearances in Guerrero and elsewhere in Mexico is truly shocking," Amnesty International Americas Director Erika Guevara-Rosas said Monday.

Asia
Migrants' Bodies Hidden in Malaysian Mass Graves for 5 Years
Guevara-Rosas called for the truth about the fate of the 43 male students from the Ayotzinapa Teacher Training College who went missing in September 2014 in the city of Iguala.

None of the 129 uncovered bodies appeared to be connected to the 43 Ayotzinapa students, feared to have been slaughtered by a gang.

The students were last seen being forced into police vans after officers opened fire at the students, who had been protesting against Guererro’s discriminatory hiring and funding practices, killing six.

The Mexican government blamed the abduction and murders on local drug cartels. However, there is evidence that the local police and army were complicit in the kidnappings.

"If it weren’t for the persistent determination of the families of the Ayotzinapa students, as well as human rights defenders and journalists… we might never even have known about these mass graves and the dimensions of the crisis," Guevara-Rosas stressed.

In early November, 2014 the former mayor of Iguala and his wife were arrested in Mexico City on charges of masterminding the abductions. The former Iguala police chief, wanted on suspicion of involvement in the atrocity, remains at large.