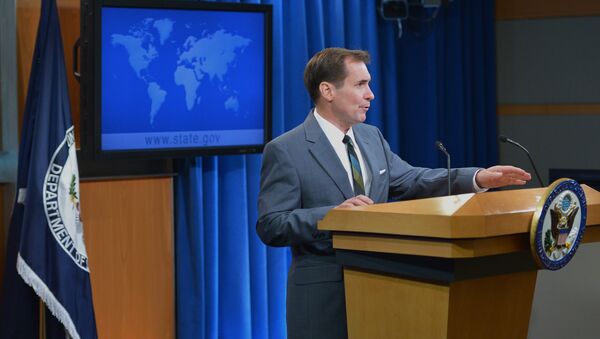 WASHINGTON (Sputnik) — The United States acknowledges that the Turkish government has a right to attack Kurdistan Workers’ Party (PKK) positions in Iraq in retaliation for PKK terrorist attacks in Turkey, US State Department spokesperson John Kirby told reporters on Monday

“Turkey has continued to come under attack by PKK terrorists and we recognize their right to defend themselves against those attacks,” Kirby said.

On Friday, Turkey launched airstrikes on the PKK, putting in jeopardy a two year cease fire with the group amid peace negotiations.

The airstrikes came after Turkey conducted its first airstrikes on Thursday against ISIL in Syria after a border incident left one solider dead and several wounded.

Then on Friday, the United States confirmed that Turkey granted clearance to the US and its partners to use Turkish airbases to conduct airstrikes against ISIL in Syria.

Shots Fired At Three Ambulances in Kurdish City on Syria-Turkey Border
Kirby claimed that the US stance on Turkey’s military campaign against the PKK was unrelated to Ankara allowing the US-led coalition to use Turkish air bases.

The PKK claims Turkey supports ISIL against Syrian Kurds, whose YPG militia is affiliated with the PKK.

NATO member Turkey considers the YPG and its parent party, the PYD, as a terrorist threat equal to ISIL.

Nearly 40,000 people have been killed in 30 years of conflict between the PKK and Turkish state.