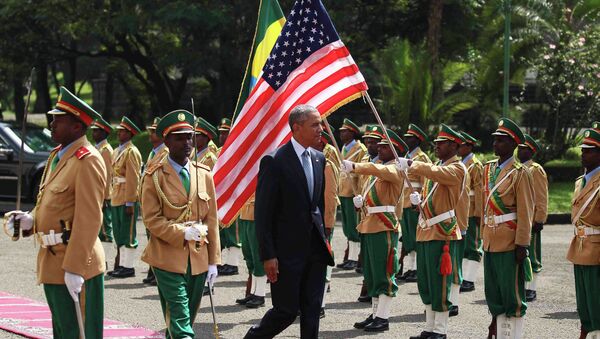 © REUTERS / Tiksa Negeri
Subscribe
International
India
Africa
The US president arrived in Addis Ababa on Sunday for a two day visit, in spite of his avowed support for human rights and the criticism he had leveled at the Ethiopian government for perceived human rights abuses.

Africa
US, Kenya to Stand Shoulder to Shoulder Against Terrorism – Obama
US President Barack Obama has been accused of hypocrisy by choosing to visit Ethiopia during his only official visit to Africa, despite concerns international human rights groups have voiced regarding the country's human rights record.

The Ethiopian government is a key strategic ally of the US in its 'war on terrorism,' and has close security ties with the US. Ethiopia has thousands of troops in neighboring Somalia, which along with Ethiopia and Kenya, face insurgent al-Shabaab Islamic militants.

Ethiopia has introduced anti-terror legislation, called the Anti-Terrorism Proclamation, which Human Rights Watch [HRW] says has been used by the government to target political opponents.

According to a HRW report on war crimes in Ethiopia, "Since mid-2007, thousands of people have fled, seeking refuge in neighboring Somalia and Kenya from widespread Ethiopian military attacks on civilians and villages that amount to war crimes and crimes against humanity.

In an open letter written to US Secretary of State John Kerry in 2013, published by the watchdog Genocidewatch.org, former Ethiopian ambassador Imru Zelleke wrote:

"Ethiopia is a major US ally in the Horn of Africa, yet America does not seem to be concerned about the blatant violations of human rights, lawless governance and unmitigated corruption by the regime in Addis Ababa."

"The regime's flagrant interference both in Christian and Muslim religious affairs has created rifts and contentions amongst the religious communities."

"In the past the regime was boasting to have broken the back of the Orthodox Christianity with similar terrorization of innocent civilians; at this moment, in the guise of an unproven terrorist activity, it is conducting indiscriminately a most vile campaign of terror, mass arrests, killings and tortures against the Muslim Community in Ethiopia."

Despite the criticism, Obama praised Ethiopia as an "outstanding partner" in the fight against militant Islamists at joint press conference held with the Prime Minister of Ethiopia on Monday.

"We don't want this visit to be used to sanitize an administration that has been known to violate human rights," said Amnesty spokesman Abdullahi Halakhe, who warned that the visit would be used by the administration as evidence of international support.