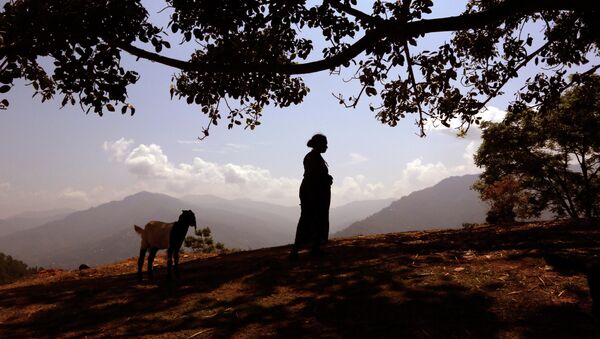 © AP Photo / Manish Swarup
Subscribe
At least eleven peopled have reportedly been arrested in southwestern Nepal in a suspected case of ritual murder.

Nepal Denies CNN’s Dr. Sanjay Gupta Operated on 8-Year-Old After Earthquake
Police have arrested eleven people from the remote village of Kudiya in southwestern Nepal, who face charges of murdering a 10-year-old boy, which local media reports said could be a human sacrifice case.

Nal Prasad Upadhyaya, police superintendent of Nawalparasi district where the incident took place, said that the detainees, who were arrested on Sunday, include at least four women.

"All the villagers say the boy was killed in a case of human sacrifice, because the suspects were superstitious and believed in witchcraft," Upadhyaya was quoted by the news agency AFP as saying.

At the same time, he said that police "cannot confirm anything until our investigations are completed."

The newspaper Kathmandu Post reported that early last week,  the father of a sick teenager confessed to the killing of the 10-year-old in order to "to chase away the evil spirits" from his ailing son, after he sought advice from a village shaman.

The man lured the boy to an isolated place with a packet of biscuits and the promise of 50 rupees (50 cents). He then performed a religious rite, slitting the child's throat and dumping his body in a bush.

Nepal to Receive up to $500 Mln for Earthquake Relief - World Bank
If convicted, the perpetrators of the crime may face a life sentence.

The village of Kudiya is home to "untouchables", the lowest level of Nepal's traditional caste system and typically the country's poorest and least educated people. Both the victim and the suspects reportedly belong to this social stratum.

Superstitions, including the sacrificial slaughter of water buffaloes, goats and roosters, are not uncommon Nepal's 28-million-strong population, 80 percent of which are Hindus. among the country's mainly Hindu population