US, Kenya to Stand Shoulder to Shoulder Against Terrorism – Obama 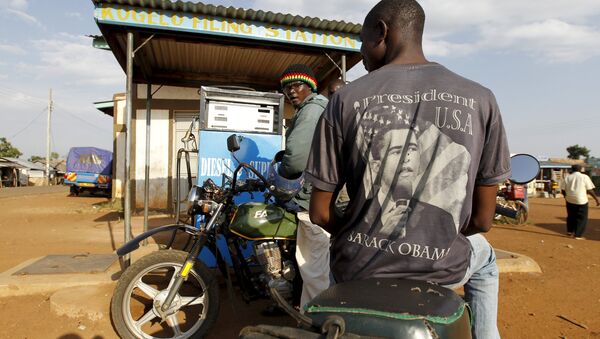 Kerry to Visit Sri Lanka, Kenya to Reinforce Relations - US State Dep't
MOSCOW (Sputnik) – Washington will support the Kenyan government in its fight against al-Shabaab militant group, US President Barack Obama said Sunday in an address to the people of Kenya.

Obama is on the first visit to his ancestral homeland of Kenya in his presidency, where he briefly met with extended family members on his estranged father’s side and attended an annual entrepreneurship summit.

“President [of Kenya Uhuru] Kenyatta and I spent a lot of time discussing the serious threat from al-Shabaab that Kenya faces. … We are going to stand shoulder to shoulder with you in this fight against terrorism for as long as it takes,” Obama said.

He added that extremists try to turn parts of the population against each other, sowing chaos in countries around the world.

“The United States and Kenya both have Muslim minorities, but those minorities make enormous contributions to our countries, they are our brothers, our sisters, and in both our countries we have to reject calls that allow us to be divided,” the US president stressed.

In recent years, Kenya has been the scene of a number of attacks by al-Qaeda affiliated al-Shabaab extremists.

The deadliest of them took place in early April, when al-Shabaab militants broke into Garissa University College in northeastern Kenya, killing 148 people, mainly Christian students, and injuring over 100 others.