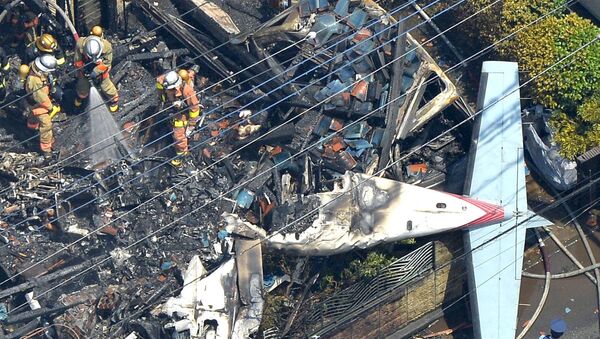 A light passenger aircraft has crashed in the residential area of Chofu, west of Tokyo, claiming the lives of three; four more injured.

Three people have died and four others were left injured after a deadly plane crash in the middle of a residential area of the city of Chofu, west of Tokyo Sunday morning, as confirmed by Japanese officials.

Two of the plane's passengers were killed in the accident while three other injured. On the ground, one woman died, while another was wounded.

One person was reportedly trapped in the burning plane, two more could not leave the burning homes on their own.

At least five homes, several cars and the five-seated aircraft itself were set afire, according to a representative from Japan's Ministry of Land, Infrastructure, Transport and Tourism, saying the plane came down at 10:58 a.m. local time (01:58 GMT) shortly after takeoff. The roofs of neighboring buildings have also been damaged.

Black smoke can be seen ascending over the site of the crash, according to footage from the news channel NHK.

"It was really horrible. It was dangerous," NHK cited a 82-year-old witness.

Fire brigades and rescue teams are working on the spot.