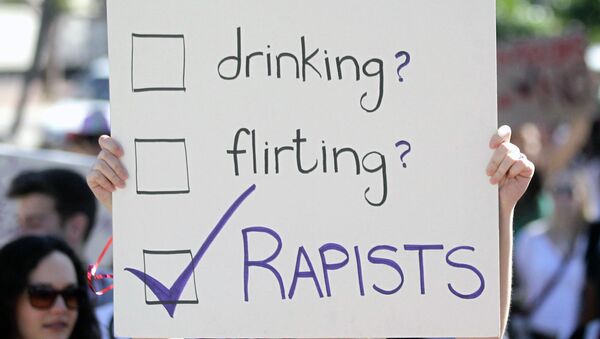 An annual SlutWalk march in Reykjavík, Iceland has brought under its banners tens of thousands of participants protesting in solidarity with victims of sexual abuse and against excusing rape.

The annual march finished in front of the parliament. Talking to the local Grapevine magazine on the success of the march in Iceland since 2011, its organizer, Reykjavík native Sunna Ben Guðrúnardóttir, 25, said "People are on our side."

"They know that it’s important, the artist, DJ and activist said. "They know it’s not about ‘sluttiness.’ It’s about your right not to be sexually violated."

The purpose of the march is to attract public attention to the legal, social and cultural issue concerning rape, remarked Sunna Ben and underscored that the core of the problem lies in the fallaciousness of victim-blaming and slut-shaming.

Proud of my daughter @Chasy96Rose who is fighting for her rights at today's #SlutWalk #druslugangan https://t.co/5ZN46LjIKV

The Xinhua news agency reported some 30,000 protesters joined the rally in this Northern European capital Saturday. One of the protesters, Lilja Jakobsdóttir, commented to the agency on her participation in the event.

"You should control your body what to do with it and no one can be able to define you from what you wear or treat your body in the way you don't want to," she said.

It's the fifth time the anti-rape protest has taken place in Reykjavík. The movement began on Apr 3, 2011 as a response to Constable Michael Sanguinetti, a Toronto police officer, who made a remark unwittingly rationalizing women being raped.

"Women should avoid dressing like sluts in order not to be victimized," the officer stated publicly earlier in 2011, talking on the issue of campus rape at a York University safety information session.

International attention had been drawn to the controversial statement after its publication, and a protest march SlutWalkToronto launched in the beginning of April.

"Basically, a lot of us are pissed!" said an anonymous student protester at that time to the York University paper Excalibur. "The media is notoriously bad at representing women or survivors as complex people, and especially as political people. If all they are going to use is sound bites, maybe the ones on the posters are at least forceful enough to make a dent in the constant stereotyping and victim-blaming."

The Toronto SlutWalk has been followed by a series of protest marches around the globe, some of which turned into permanent organizations that keep working on the issue of violence against women.