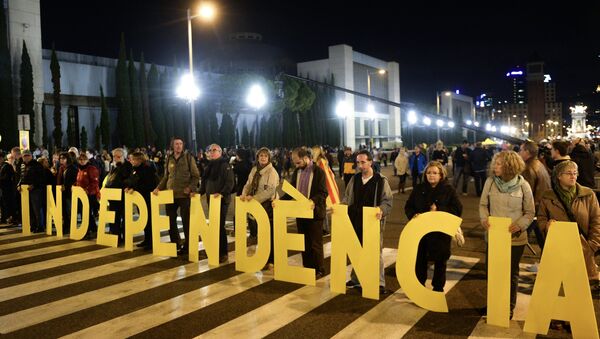 The issue of Catalonia seeking independence should be considered in a broader context, as opposition to the EU undemocratic policy, Catalan Lawmaker Quim Arrufat said.

MOSCOW (Sputnik) — Catalonia’s potential secession from Spain will have a profound impact on the European Union as a whole, a member of the Catalan parliament from the Popular Unity Candidates – Left-Wing Alternative (CUP-AE) party told Sputnik Friday.

"The Catalan issue should be viewed in a broad context, similar to how it should have happened in Greece, but did not happen. At some moment, some people in some part of Southern Europe will raise the flag of sovereignty and democratic dignity," Quim Arrufat said.

According to the Catalan politician, it is likely that the Spanish government would attempt to impede the holding of a vote on independence or the secession process, which would run against the "common sense of democracy."

In the event that Madrid demonstrates "authoritarian reactions" to attempts to gain independence, Catalonia should defend itself and face the consequences of such a move, Arrufat said.

Catalan Town Mayor: Imposing Spanish Flag on Catalonia 'Anti-democratic'
Otherwise, according to the Catalan lawmaker, "[countries of] Southern Europe will continue to lose their sovereignty and democratic and social rights."

On September 27, Catalonia is due to vote in regional elections. The Together for Yes coalition of the Republican Left of Catalonia and the Democratic Convergence of Catalonia (CDC) has pledged to initiate a process to separate the autonomous region from Spain, should it win the vote.

In November 2014, over 80 percent of Catalans supported seceding from Spain in a nonbinding vote. However, some two thirds of those eligible to vote did not take part.