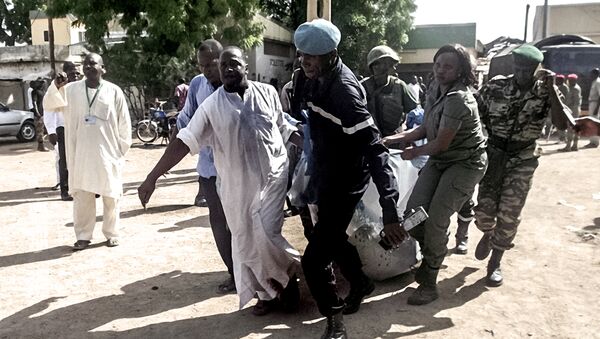 WASHINGTON (Sputnik) — Washington has condemned the twin bombings in Cameroon and Nigeria on Wednesday, and reaffirmed the US support in the fight against Boko Haram militants, US State Department Deputy spokesperson Mark Toner said in a press release on Friday.

“The United States strongly condemns the horrific and indiscriminate Boko Haram suicide attacks on the central market and Barmare residential neighborhood of Maroua, Cameroon, and the multiple bomb blasts at two bus stations in the northern Nigerian city of Gombe on Wednesday, July 22,” the release read.

ISIL, Boko Haram Use Drugs as Analogue of Gold – Russian Official
Washington stressed it remains committed to working with the governments of Cameroon and Nigeria in their ongoing efforts to defeat Boko Haram, and ready to expand the US support for this fight, according to State Department.

“We support these efforts through a number of security and counterterrorism assistance programs, which provide intelligence, advisors, training, equipment, and logistics,” the release read.

According to the latest media reports, at least 50 people were killed on Wednesday in Cameroon and Nigeria.

Africa
Over 30,000 Nigerians Flee From Boko Haram to Cameroon, Chad - UN
Boko Haram began staging attacks on northeastern Nigeria in 2009 and expanded them to Cameroon in 2013, moving on to Chad and Niger in 2015. The extremists want to establish an Islamic state ruled by Sharia law in the region.

Boko Haram jihadists were first associated with al-Qaeda, but expressed their support for Islamic State radicals in 2014, amid ISIL militants’ advances in Iraq and Syria. Boko Haram pledged formal allegiance to ISIL in March 2015. ISIL, a radical Sunni group, wants to establish an Islamic caliphate on the territories it has ceased.