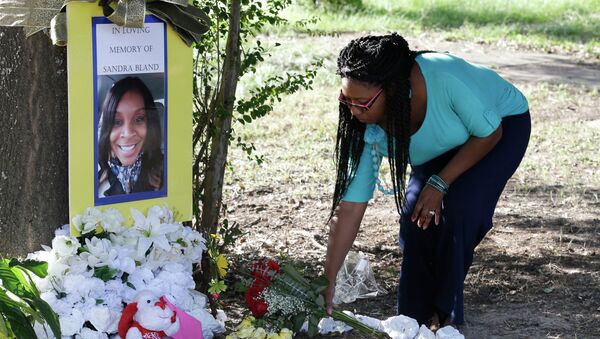 © AP Photo / Pat Sullivan
Subscribe
International
India
Africa
According to Deo Odolecki of Greater Cleveland Cop Block, the inability of Texas authorities to release a problem-free arrest video of Sandra Bland shows that the police prefer to make their own rules to protect themselves.

“It is typical of a police state that makes all its own rules,” Odolecki said about Bland’s arrest as shown on official police and private videos as well as her controversial death.

On July 10, 2015, Bland was pulled over by a Texas state trooper in Waller County for failing to signal while changing lanes with her vehicle. She was arrested and taken to detention allegedly because she engaged in an altercation with the trooper. Bland was found hanged in a jail cell three days later.

The authorities said the death was a suicide, but Bland’s family had demanded an investigation.

On Tuesday, Texas authorities released the arresting trooper’s dash cam video, but pulled it and released a second version the following day.

As media reported of possible irregularities in the continuity of the police’s video, Odolecki questioned its veracity and the authorities’ intent.

“They withhold the video for several days and we are surprised when it is an edited version?” he said.

Sandra Bland’s Behavior Prior to Arrest Without Hints of Suicide
On Wednesday, Texas Department of Public Safety Press Secretary Tom Vinger told Sputnik that the police video was not edited before being released, and the upload affected its quality, which is why the authorities restored and reposted it.

Odolecki, however, expressed doubt that any police officer or official would be held accountable in the Bland case.

Police protecting their own in cases of likely wrongdoing has become a usual practice, he said, and not holding officials to account for their actions should not come as a surprise to anyone.

Over the past year, police brutality and killings of mostly, but not exclusively, African-Americans have ignited waves of protests across the United States.

President Barack Obama has launched several policy initiatives in the wake of renewed calls to counter police brutality and racial bias in the United States. The initiatives include investing in police body-worn cameras for law enforcement agencies across the country, and a plan to address segregation in neighborhoods.

Greater Cleveland Cop Block is a decentralized US advocacy group focused on police accountability, according to the group’s website.