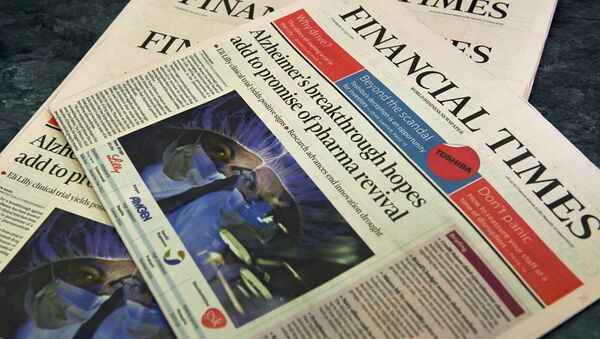 MOSCOW (Sputnik) — UK publishing and education company Pearson announced Thursday that it had agreed to sell its only major media asset, the Financial Times (FT) Group to one of the largest media corporations in Japan, Nikkei Inc. for 844 million pounds ($1.31 billion) payable in cash.

“Pearson has been a proud proprietor of the FT for nearly 60 years. But we’ve reached an inflection point in media, driven by the explosive growth of mobile and social. In this new environment, the best way to ensure the FT’s journalistic and commercial success is for it to be part of a global, digital news company,” John Fallon, Pearson’s chief executive said, as quoted on the company’s website.

Fallon added that his company will fully concentrate on its educational business.

'Inadequate': Syngenta CEO Rules Out Further Merger Talks With Monsanto
Tsuneo Kita, Chairman and Group CEO of Nikkei, said that he is proud to team up with the Financial Times, adding that the two companies share the same journalistic values.

“Together, we will strive to contribute to the development of the global economy,” Kita said.

Earlier on Thursday, Pearson for the first time officially confirmed media rumors circulating since the beginning of this week, that the company was in talks over a possible sale of its FT Group.

Monday media reports suggested the deal could be worth some $1.6 billion and named Bloomberg, Thomson Reuters and Axel Springer among potential buyers.