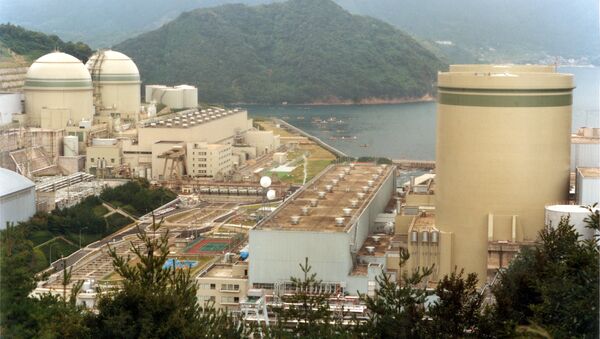 A picture of ‘mutant daisies’ found near Japan’s Fukushima Daiichi nuclear plant are making the rounds on the Internet, raising concerns about the long-term effects of the now four-year-old disaster, and the safety of the areas surrounding the plants.

The picture of the daisies was uploaded on Twitter by user @san_kaido in May and was shared over 600 times. It shows four daisies, three of which appear to be severely deformed. They were found in Nasushioobara City, approximately 68 miles away from the nuclear plant site.

Along with the picture, the user tweeted a description of the daisies and the recorded radiation level in the area. Loosely translated, the tweet reads as follows:

"The right one grew up, split into 2 stems to have 2 flowers connected to each other, having 4 stems of the flower tied belt like. The left one has 4 stems grow up to be tied to each other and it had the ring-shaped flower. The atmospheric dose is 0.5 μSv/h at 1m above the ground."

Officials classify 0.5 μSv/h, or millisieverts per hour of radiation, as a safe enough level for "medium to long-term habitation."

However, the frightening image of the flowers will likely raise concerns about the safety of the area, particularly as Prime Minister Shinzo Abe’s government moves to lift evacuation orders of the hundreds of refugees who fled the area in the aftermath of the nuclear accident.

According to gardening experts, the flowers have been afflicted by a rare condition known as "fasciation" or "cresting," which is typical in plant life exposed to high levels of radiation. The condition is believed to be triggered by hormonal imbalances resulting from a damaged growth environment.

The flowers are the latest in a long list of mutated life forms reported in the four years following the meltdown of three reactors in the Fukushima Daiichi plant, caused by an earthquake and tsunami that struck the region in March 2011.

In June 2013, images of fruits and vegetables with tumor-like growths appeared on the website Igmur, titled "Effects from the Fukushima radiation disaster?” A study published in the journal Heredity in 2014 also revealed that a number of species, including birds, monkeys, and butterflies, “have been significantly impacted by the radioactive releases related to the Fukushima disaster."

Tokyo Accused of Forcing Nuclear Refugees Back Into Contaminated Areas

But despite mounting concerns over contamination levels in these areas, Tokyo has announced plans to revoke evacuation orders by March 2017 and cut compensation to nuclear refugees by 2018, effectively forcing them to return to contaminated areas.

A recent Greenpeace evaluation of a forested area by the nuclear plant found that it would be "impossible for people to safely return to their homes," because of how "widespread" the contamination remains. According to the environmental organization, the radiation levels are still ten times more than the maximum deemed safe for the public.

"Stripping nuclear victims of their already inadequate compensation, which may force them to return to unsafe, highly radioactive areas for financial reasons, amounts to economic coercion," Jan Vande Putte of Greenpeace Belgium said in a statement. "Let’s be clear: this is a political decision by the Abe Government, not one based on science, data, or public health."

Some 140,000 people were evacuated from their homes within 12 miles of the Daiichi plant, and the disaster prompted the country’s nuclear industry to shut down all of its 54 operating reactors. Despite widespread opposition, Abe has announced plans to have 20% of the country’s electricity be nuclear powered by 2030.