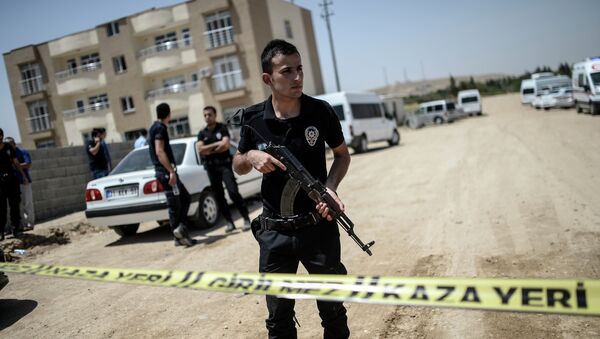 MOSCOW (Sputnik) — Earlier in the day, two police officers were found dead in their homes in the Turkish town of Ceylanpinar near the Syrian border.

"A punitive action was carried out… in revenge for the massacre in Suruc," the People's Defence Forces (HPG), the military wing of the PKK was quoted by the Hurriyet newspaper as saying.

The killing of the police officers comes two days after a terrorist attack in the southeastern Turkish town of Suruc. A suicide bomber detonated a bomb near a cultural center in the city, killing 32 people and injuring over 100.

Deadly Blast Hits Turkish City Of Suruc On Border With Syria
ISIL, in control of large areas across Syria and Iraq, was reported to be behind the attack.

The Kurdistan Workers' Party was founded at the end of the 1970s to legitimize self-determination for the Kurds, about 25 percent of the Turkish population.

In 2013, the Turkish government initiated a peace process with the PKK. Talks were jeopardized in 2014, as Ankara was reluctant to help Kurds to fight ISIL when the jihadist group attacked the Kurdish town of Kobane on the Turkish border with Syria.