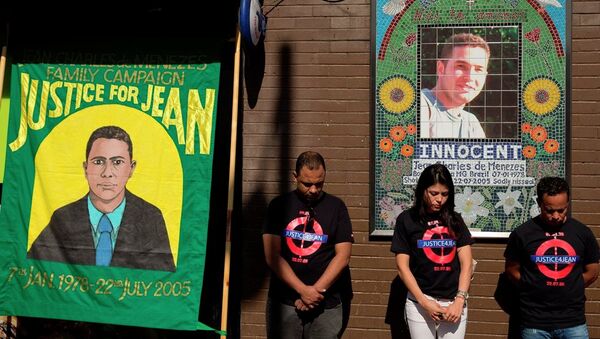 Family and friends of a Brazilian man shot dead by London's Metropolitan Police Service have gathered at Stockwell tube station in south London; the scene where Jean Charles de Menezes was gunned down at point blank range by armed officers 10 years ago.

Just two weeks after the 7 July bombings in 2005, London was under attack again. On Thursday 21 July 2005, four attempted bomb attacks disrupted London's transport system. Nobody died but it left a legacy on a city already reeling with anxiety, paranoia and pain. And on 22 July, one man did die — Jean Charles de Menezes — but, he wasn't a suicide bomber.

Ten years ago, that morning, a Brazilian-born man left the house of what the police believed to be the home to a possible terror suspect. He never returned. As the man entered Stockwell tube station, making his way to work, the police jumped to the wrong conclusion, suspecting de Menezes of being a potential suicide bomber. Two police marksman shot him seven times in the head, killing him instantly.

No police officer has ever been charged over the murder of the innocent man, despite an inquest jury finding;catastrophic failures' by the police which led to the killing of de Menezes. The Crown Prosecution Service (CPS) ruled out prosecuting the officers in 2006, but in 2007, the CPS charged the Met Police with breaching health and safety laws, leading to a $273,000 (£175,000) fine.

At the vigil alongside family of Jean Charles de Menezes, who was tragically shot dead ten years ago today. RIP pic.twitter.com/RiAihSljAl

In 2008, an inquest jury returned an open verdict after being told by the coroner that they could not conclude he had been unlawfully killed and in 2009, the Metropolitan Police paid the family compensation.

Speaking after the ruling, the family of de Menezes said they felt "vindicated" and accused the coroner of "failing on every count."

Ten years later and the family have taken their battle to the European Court of Human Rights to challenge the decision not to prosecute anyone for his murder in 2005.

Lawyers argue that the assessment used by prosecutors to reach a decision that no-one should be charged contravenes with Article two of the European Convention of Human Rights — the right to life. They claim the CPS test for sufficient evidence for a "realistic prospect" of conviction is too high a threshold.

The case in Strasbourg has been lodged by Patricia da Silva — Mr de Menezes' cousin. Hugh Southey QC, representing the family told the court in Britain that he would argue that previous investigations into his death did not satisfy the requirements of Article two.

"We submit that the legal test does not correspond to Article two and fails to hold the officer to account… If the public don't believe that officers may be held to account, the order of the law is called into question."

Representing the UK, Clare Montgomery QC, told the court that following the 7/7 bomb attacks on London there was "huge pressure on the officers" but none of their mistakes "amounted to gross negligence or manslaughter."

"To weep is to make less the depth of grief." from Henry VI by Shakespeare. #InMemoriam Jean Charles de Menezes #QOTD pic.twitter.com/zrdsj8ZL1K

The murder of de Menezes has raised huge questions over the Met's counter-terror strategies for which answers are still to be found. Meanwhile, a minute silence has been held outside Stockwell tube station marking the exact moment the 27 year old was shot dead. Ten years on, standing outside the same tube station, the family are still fighting for justice.