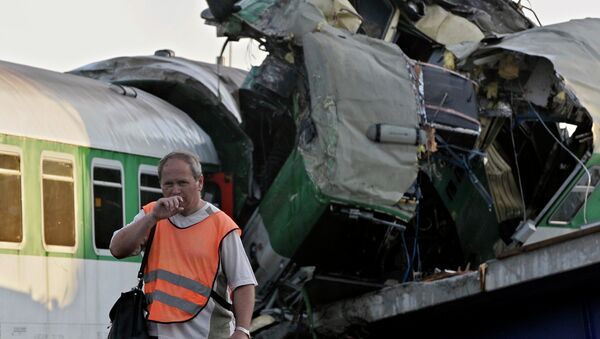 © AP Photo / Bela Szandelszky
Subscribe
International
India
Africa
Two passengers died and over 20 were injured on Wednesday when a high-speed train hit a truck at a rail crossing near the northeastern Czech town of Studenka, a spokesman for the regional rescue service said.

Amtrak Train Crash Damage Exceeds $9.2Mln
PRAGUE (Sputnik) — The force of the collision was so great that the truck’s engine was recovered at a distance of more than 650 feet from the crash site. The passenger train traveled a further 1.2 miles before the brake engaged.

"Two people died in the collision and more than 20 were wounded, some of them are in a critical condition at a hospital," spokesman Lukas Humpl told reporters.

Ambulances, fire engines and helicopters have been dispatched to the scene. Rescuers are pulling crash survivors from the wreckage of the train's carriages.