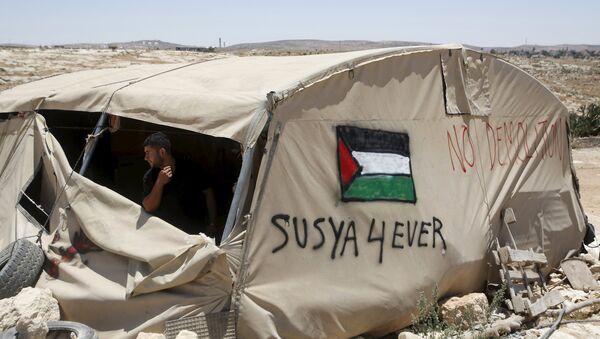 EU foreign ministers have joined the international condemnation of Israel, calling on the country to stop plans for the "forced transfer" of people and the "demolition of Palestinian housing" in the West Bank village of Khirbet Susiya, amid growing speculation it may be knocked down.

The bloc's 28 foreign ministers released the joint statement, following similar protests from US government officials, who said that any eviction or demolitions in the village, which lies south of the city of Hebron, would be "harmful and provocative."

In #Susiya, a Palestinian village awaits its destruction by #Israel: http://t.co/wc9BkqRCbi pic.twitter.com/QfS3m6GyUF

"We're closely following developments and we strongly urge the Israeli authorities to refrain from carrying out any demolitions in the village," State Department spokesperson John Kirby said last week.

There had been growing speculation that a number of dwellings would be demolished in the coming days or weeks, following an Israeli Supreme Court decision that gave the country's military governing authority the right take down the Palestinian homes because they had been built without proper permission.

Meet the ppl in #Susiya hear and watch them then think that those same faces might end up without a house http://t.co/KOxK4Eg1ZV #SaveSusiya

These fears were exacerbated after a senior Israeli military officer visited the village and told locals that 37 constructions had been identified for demolition before the scheduled appeal hearing on August 3.

A number of Israeli and international activists have joined a 24-hour protest at the site in an attempt to avoid demolitions.

While Israel claims that the houses have been built illegally, locals and activists say that Israeli authorities have continually refused to give them proper permission to build their homes, and denied people living in the settlement the opportunity to connect to basic utilities such as electricity and water.

The fact that Israeli authorities have threatened to demolish houses and remove Palestinian people from area has been seen as highly hypocritical, given that the village of Khirbet Susiya lies in the occupied territories of the West Bank, with many people believing that the Israeli occupation of the land is itself in breach of international law.

Cracks Between Israel and the West

The fact that US government and EU officials have spoken out on the issue is another sign of the frayed tensions in the once seemingly unbreakable relationship between Israel and the West.

World leaders and activists were scathing of Israeli Prime Minister Benjamin Netanyahu's actions during last year's summer offensive in Gaza that resulted in the deaths of more than 2,200 Palestinians, with many calling the PM a "war criminal."

Sweden voted to officially recognize Palestine as a state, along with the Vatican, while Britain's parliament passed a symbolic measure to recognize the Palestinian state, which was seen as a backlash to Israel's actions in Gaza.

Meanwhile Netanyahu was equally scathing of the US-led negotiations resulting in the Iran nuclear deal, which the Israeli leader denounced as a "historic mistake" that would put Israel's national security at risk.