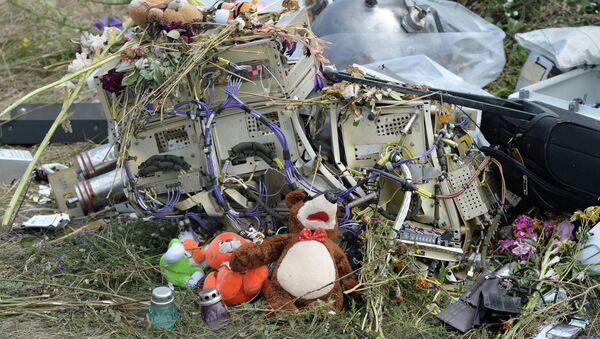 © Sputnik / Mikhail Voskresenskiy
/
Go to the photo bank
Subscribe
The results of the investigation will not be presented for public discussion, a Ukrainian official said.
Netherlands to Present Final MH17 Crash Report August 10
KIEV (Sputnik) — The results of the official international investigation into the MH17 Malaysia Airlines plane crash will be classified, the Ukrainian Deputy Foreign Minister for European Integration, Olena Zerkal, said at a briefing on Tuesday.

On July 17, 2014, Malaysia Airlines flight MH17 crashed in Ukraine's eastern region of Donetsk en route from Amsterdam to Kuala Lumpur. All 298 people on board, mostly Dutch citizens, were killed.

Later that year, the Dutch Safety Board released a preliminary report on the crash stating that the plane had broken up in mid-air after being hit by a number of high-energy objects that penetrated the plane from the outside. A final report is expected later this year.

An international investigation team, comprising experts from Ukraine, the Netherlands, Belgium, Australia and Malaysia, was established shortly after the crash. Its mandate expires February 7, 2016.

"As for the criminal investigation, a joint investigation team has been formed, and the inquiry is underway. At the same time, it is to remain confidential, and the results will not be presented for public discussion,” Zerkal said.

Donbass Militia Did Not Down MH17 - Russian Radars Data
Last week, Malaysia submitted a draft resolution to the UN Security Council calling for the creation of an independent UN tribunal to identify and prosecute those responsible for the MH17 disaster.

Zerkal supported the creation of the tribunal, adding that it would help bring the perpetrators to justice, regardless of their nationality.

Russia has not supported the establishment of a criminal tribunal, calling it premature and counterproductive, urging that the Dutch Safety Board investigation results must come first.