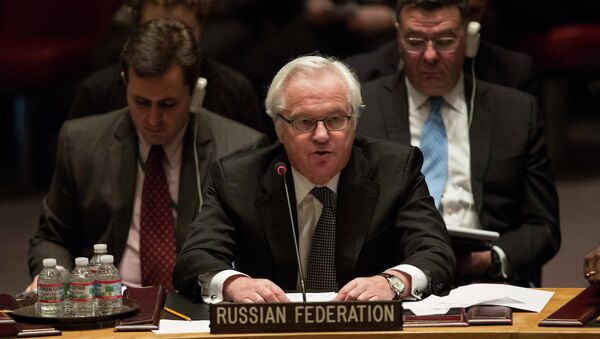 Russia has urged to enhance the United Nations’ role in the investigation of the Malaysia Airlines flight MH17 crash in Ukraine in 2014, Russia's Envoy to UN Vitaly Churkin said.

UNITED NATIONS (Sputnik) — On Monday, Russia has submitted to the UN Security Council a draft resolution on the investigation of a Malaysian Boeing passenger aircraft crash.

"We have called to intensify the role of the [UN] Secretary General, provided by the Resolution 2166. There are a number of provisions urging a deeper involvement of all the parties concerned," Churkin told reporters in New York on Monday.

He added that the draft aims to enhance the capacity of the investigation and to fully unlock the potential of the Security Council Resolution 2166, demanding a full, thorough and independent investigation into the incident.

US Unaware of Proposed Experiment to Recreate MH17 Crash
On July 17, 2014, Malaysia Airlines flight MH17 crashed in Ukraine's eastern region of Donetsk en route from Amsterdam to Kuala Lumpur. All 298 people on board, mostly Dutch citizens, died. According to a preliminary report by the Dutch Safety Board, the plane fell apart in midair after being hit by numerous high-energy objects.

Last week, Malaysia submitted its own draft resolution to the UN Security Council calling for the creation of an independent UN tribunal to identify and prosecute those responsible for the downing of MH17.

The Russian Foreign Ministry said the initiative was premature. Moscow has advised waiting for the Dutch Safety Board to release their final report on the crash, expected in October 2015.