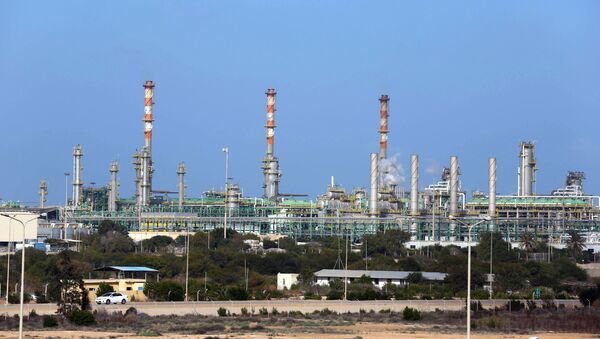 © AFP 2021 / MAHMUD TURKIA
Subscribe
Four Italians, employees of the construction company Bonatti, were kidnapped in Libya near the starting point of the pipeline Greenstream, according to the statement of Italian Foreign Ministry.

According to the ministry, the four Italians are employees of the construction company Bonatti, and were kidnapped near the Mellitah Oil and Gas Complex, the starting point of the pipeline Greenstream, three quarters of which is operated by Eni while one quarter is operated by the Libyan National Oil Corporation (NOC).

"[Italian Foreign Ministry's] Crisis Unit took immediate steps to follow the case and is in constant contact with the families of [our] compatriots and with the company Bonatti. As you know, following the closure of the Embassy of Italy in Libya on February 15, the foreign ministry had reported the extremely difficult situation in the country and called on all compatriots to leave Libya," the ministerial statement said.

ISIL Claims Responsibility for Blast Near Italian Consulate in Cairo
Italian foreign policy chief Paolo Gentiloni told reporters that the ministry is cooperating with intelligence services to gather all the information, adding that it is difficult to say exactly who was behind the kidnapping.

Libya has been in a state of turmoil since early 2011 after the Arab Spring protests led to a civil war and the overthrow of long-time leader Muammar Gaddafi.

There are two rival governments in the country. The group controlling the Libyan capital of Tripoli and adjacent western areas is not recognized internationally.

A number of areas in Libya are not controlled by central authorities, but are under the control of the Islamic State (ISIL) militant group which has become increasingly active in the country due to the internal tensions.