Poroshenko Hopes to Regain Control Over Donbass Before End of 2015 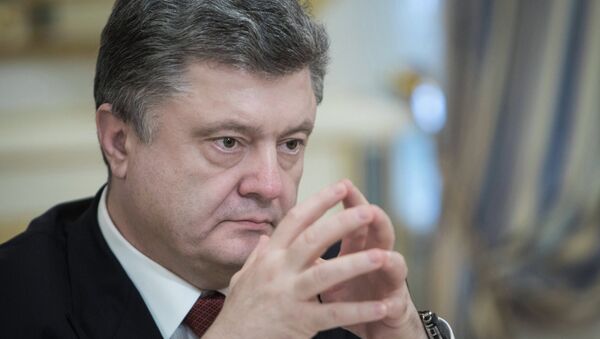 © Sputnik / Mikhail Markiv
/
Go to the photo bank
Subscribe
Poroshenko says that Kiev hopes to regain control over the Donbass region until the end of the year.

Lugansk Republic Completes Withdrawal of Less Than 100mm Weapons in Donbass
KIEV (Sputnik) — Kiev has fulfilled its commitments under the Minsk agreement and hopes to regain control over the Donbass region until the end of the year, Ukrainian President Petro Poroshenko said Sunday.

On Thursday, Poroshenko submitted a proposal on constitutional amendments which would address the special status of the Donbass region to the Ukrainian parliament, the Verkhovna Rada.

"It is Ukraine's obligations to carry out constitutional reforms. We are ahead of the schedule, with the 11th article [of the Minsk agreement] de facto fulfilled. We have launched the process of constitutional amendments. Now, Russia must begin to carry out its obligations as it should be 'until the end of the year.' Russia must withdraw illegal armed formations, close the border and give the border control back to Ukraine," Poroshenko told the ICTV television channel in an interview.

Poroshenko added that "the understanding with the Ukrainian brothers will be found" as soon as Ukraine regains control over the Donbass region.

Kiev's Proposed Constitution Fails Minsk II Despite Nuland's Bluster
Constitutional amendments providing more autonomy to the Donetsk and Lugansk regions were stipulated by the February Minsk agreements signed by Kiev and Donbass representatives, along with a ceasefire deal.

Since April 2014, the Ukrainian government has been fighting independence supporters in the country's southeast regions. The United Nations estimates that more than 6,500 people have died in the clashes.

Moscow has repeatedly denied involvement in Ukraine's internal affairs and called for peaceful resolution of the crisis.

000000
Popular comments
This cretin should, at the very least, sober up before talking, somewhere just before he starts throwing his empties at the other zoo animals that passes for a government over in Kiev.