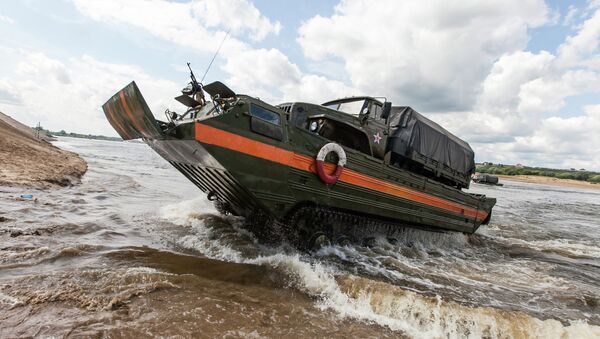 © Sputnik / Vladimir Chuchadeev
/
Go to the mediabank
Subscribe
International
India
Africa
Next year, Russian military engineers plan to hold a brand-new contest with special tasks which can be likened to the world famous Formula One race, according to Lieutenant-General Yuri Stavitsky, chief of the Russian Engineering Troops.

Currently, the country's engineering troops take party in the two types of international military sports events: the Open Water competition and the Safe Routes contest among sappers. Earlier, both contests were included in the program of the International Army Games, due in Russia in August 2015.

"During next year's planned Army Games, we intend to add another contest, the Engineering Formula competition, which will be similar to  Formula One auto racing," Stavitsky said.

He added that unlike Formula One, Engineering Formula will see each car implement its own specific task, including overcoming obstacles, clearing debris and performing water-related tasks.

NATO Representatives Invited to 2015 Army Games in Russia
He also said that the contest is due to be held in the Volzhsky center in Russia's Volgograd region.

In 2013, the Aviadarts competition for pilots and the Tank Biathlon were for the first time held in Russia, in events that were initiated by the country's Defense Minister Sergei Shoigu. A year later, armies from countries throughout the world signaled their interest in taking part in these competitions.