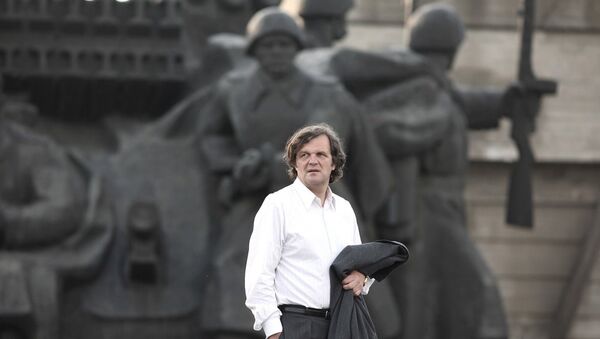 No Show: Ukraine Wants to Nix Emir Kusturica Gig Over Support for Crimea
Musician and award-winning filmmaker Emir Kusturica said that it is logical that Ukraine's Ministry of Culture demanded a ban for his band's concert in Kiev, because of the country's post-coup political situation.

The culture ministry deemed "inappropriate" the planned July 28 concert by Kusturitsa and his No Smoking Orchestra, in commemoration of the millennial anniversary of the death of Kievan Prince Vladimir the Great, for fear of possible "provocations."

"This decision did not surprise me, especially if you know that the Ukrainian government is the result of a coup which took place in this country and violently changed Europe, this time with the help of a broad spectrum of nationalists and the Right Sector," Kusturica told Serbian daily Politika.

Kusturia added that the ease at which decisions are made on who can come to the country and who is not bear a resemblance to "real rule by fascists, who today call fascists those who lost 25 million people in the struggle against fascism."

The winner of two Palme d’Or awards at the Cannes Film Festival, a bass guitarist and the founder of the Emir Kusturica & The No Smoking Orchestra, Emir Kusturica is a strong supporter of Russia and Crimea’s 2014 reunification with Russia.

000000
Popular comments
There's no limit to the stupidity of Ukrainians.
Neil McGowan
11 August 2015, 11:05 GMT
000000
Anti-fascists are called fascists - welcome in the world of west imperialism