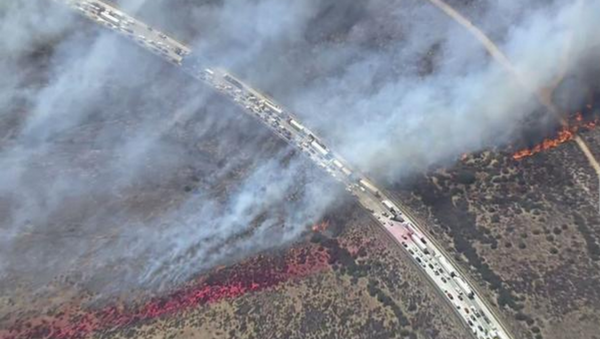 A 2,000-acre wildfire spread through Cajon Pass on Friday afternoon, burning at least 10 vehicles along the 15 Freeway between Los Angeles and Las Vegas.

Beginning around 2:30 pm, the fire has closed all lanes of both southbound and northbound traffic. As a major highway connecting Los Angeles and Las Vegas, the corridor sees heavy traffic at rush hour.

Between 70-80 vehicles have been abandoned on the highway. Officers are awaiting tow trucks to remove the vehicles from the fire's path.

The blaze is believed to have begun as a vegetation fire which was quickly spread by the 40 mph winds.

"Currently we have not only a multi-casualty incident, but a large wildfire threatening structures," Josh Wilkins with the Bernardino County Fire Department told local news.

According to the local NBC affiliate, fire officials are urging commuters to stay in their cars because "water drops can severely injure you."

No injuries have been reported at this time, though mandatory evacuations have ordered for certain areas along the highway.