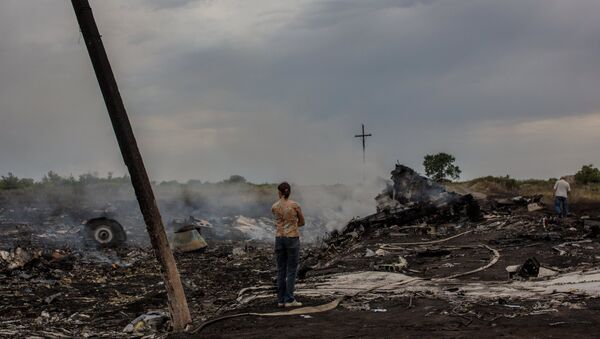 © Sputnik / Andrei Stenin
/
Go to the mediabank
Subscribe
International
India
Africa
Commenting on proposals to create a UN-backed tribunal to punish the perpetrators of last July's Malaysia Airlines MH17 shoot down, independent German journalist Christof Lehmann told Sputnik that international tribunals are inevitably biased, and that a tribunal would be the wrong forum for holding those responsible for the crime to account.

MH17 Crash a Year On: Why Are These Five Questions Still Unanswered?
Lehmann, the founder of independent online newspaper nsnbc international, told Sputnik that "if we look at the track records of international tribunals, from the ICTY to STL to the ICC, we see that all of them have track records which are extremely biased, to say the very least." The journalist cited international tribunals' discriminative prosecution standards, as well as their selective attention when it comes to the countries subjected to prosecution.

As far as the MH17 investigation is concerned, Lehmann stated that he believed that "an international tribunal would be the wrong forum. [The shootdown of MH17] is a crime committed on Ukrainian territory, and it should be a Ukrainian court that holds this trial and sentences those who are responsible for it." The journalist did not specify when and under what circumstances such a trial would be possible.

UN Security Council to Convene MH17 Tribunal Next Week
The journalist argued that as things stand today, "the entire discourse [on the crash] is extremely biased, colored by "either Eastern or Western bias," which results in very little "objective coverage about it. And that's a real tragedy for the 298 people onboard that plane."

Referring to the words of Malaysian Prime Minister Datuk Seri Najib Tun Razak, who immediately responded to the crash "by blaming all of the parties who are involved in geopolitical games," Lehmann stated that "when governments are playing geopolitical chess games, none of the parties involved either directly or indirectly is forthcoming with independently trustable, verifiable evidence."

Donbass to Hold Commemorative Events at MH17 Crash Site
On July 17, 2014, a Malaysian airliner en route to Kuala Lumpur from Amsterdam crashed in southeastern Ukraine, resulting in the deaths of all 298 passengers and crew on board. According to a preliminary report by the Dutch Safety Board, the Boeing 777 fell apart in midair after being hit by numerous high-energy objects in the zone of conflict between Kiev and independence-supporting rebels in Ukraine's southeast. Since then, the two sides have been trading blame for the crash, with Kiev, backed by Brussels and Washington, suggesting that independence supporters downed the plane 'acting with help from Moscow'. Moscow, for its part, has repeatedly denied having anything to do with the crash, while noting that independence militia did not have the technical capability to down the aircraft.

The civil conflict in eastern Ukraine began in April 2014, when Ukrainian authorities launched a military operation against Donbass self-defense forces which had rejected the outcome of the February's Maidan coup d'état.