Residents Clash With Police in Northern Rome Over Immigrants Arrival 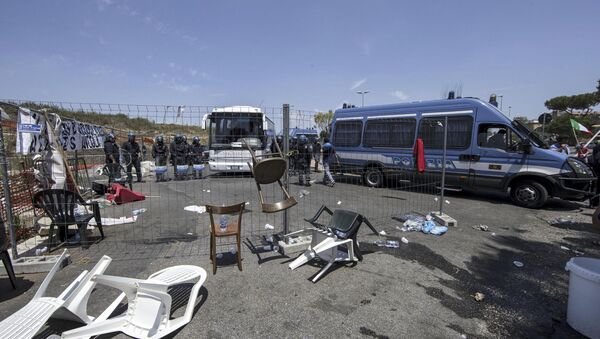 © AP Photo / Massimo Percossi
Subscribe
The residents of Casale San Nicola, a northern suburb of Rome, protested against arrival of a hundred refugees to a reception center set up in an old school in the suburb.

MOSCOW (Sputnik) — Violent clashes between local residents and police forces took place in Casale San Nicola, a northern suburb of Rome, over the arrival of a hundred refugees to a reception center set up in an old school in the suburb, the Corriere Della Sera reported Friday.

Members of the public, supported by the far-right, neo-fascist movement CasaPound Italy, set up a blockade to prevent entry to the immigrants. While buses carrying the refugees were trying to pass, some protesters threw stones at police, injuring four officers, according to the Corriere Della Sera.

One bus carrying about 20 people was subjected to chanting and threats by the anti-immigrant crowd, that proceeded to throw bottles; this situation led to an escort of several officers in riot gear accompanied by armored trucks being provided.

Italian Fascists and Antifascists Demonstrate in Italian Border Town
"You must get out of here," the Corriere Della Sera cited protesters as shouting.

The newspaper quoted police as saying of the incident that it was "therefore necessary for the forces in the field to wear protective helmets and increase the use of force to restrain the behavior of the demonstrators, which is at the moment going beyond any form of legality."

CasaPound started as a social center of fascist inspiration founded in Rome in late 2003 with the squatting of a state-owned building in the neighborhood of Esquilino in Rome. The phenomenon spread with other squats, demonstrations and various initiatives springing up, eventually evolving into a political movement. In June 2008, CasaPound assumed the current name CasaPound Italy.

The residents, backed by the fascist group CasaPound Italy, say that they fear that the immigrants' arrival to the small community of some 400 people will turn into an "invasion" and a threat for their security.