Greece – Opening Floodgates for the Vultures 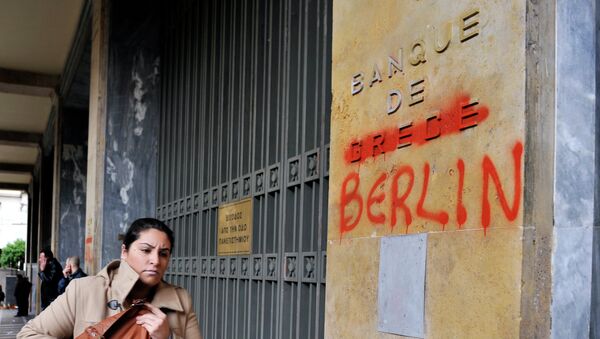 © AFP 2023 / LOUISA GOULIAMAKI
Subscribe
International
India
Africa
Peter Koenig
All materials
Greece, once a potential gateway for a new and again sovereign Europe, has made a U-turn, becoming a floodgate for the invasion of vultures from Washington and Brussels.

Letter to Friends from The Delphi Initiative

"Sputnik". There are no words to express my sadness, anger and fury — and again sadness on the Greek Parliament's acceptance of the troika's abject, humiliating and outright nation-destructive YES vote — and an overwhelming yes-vote, that is.

Once upon a time — about 6 days ago — Greece was still the potential gateway to a new Europe, a Europe that could see in Greece how to regain sovereignty, autonomy and self-determination — and above all, democracy, the very wisdom Greece gave Europe 2500 years ago.

Not respecting the people's democratic and overwhelming NO to the troika-imposed austerity, Mr. Tsipras and his small isolated team of Syriza members went to Brussels accepting a 'package' much worse than the one the people rejected a week before. By signing a memorandum of agreement, he offered the vultures of Europe, Washington and Wall Street a sell-out of his country.

Risk of False-Flagging Greece Into Submission and Chaos?
Though, at the time, not all was lost. The MOA has no legal standing on its own before parliamentary ratification. In the night from Wednesday to Thursday from, 15 to 16 July 2015 — a date to remember — the Greek Parliament after a brief at times fiery debate and especially after Tsipras energetically defending his MOA under threat of resignation — gave green light to the criminal troika to suck Greece empty of any remaining public property and services.

Greece, once a potential gateway for a new and again sovereign Europe, has made a U-turn, becoming a floodgate for the invasion of vultures from Washington and Brussels, the banksters and looters of Europe. The negotiations (sic) of PM Tsipras and his team last Sunday in Brussels were not only treason on the Greek people — but on Europe. It may mean the full colonization of Europe — and a repeat of a German brown wave — which in the 1930's everybody saw coming, but nobody dared say beep, let alone act in resistance.

Greece to Face Tax Hikes, High Unemployment, Recession
Now it's up to the people of Greece to muster sufficient solidarity to stop the pillaging of their country and the un-democracy that is unfolding in Greece and throughout Europe — and ultimately it is also up to us, the 99.99% in Europe and America, to occupy streets as long as it takes to get ‘regime change' of the neoliberal governments and financial assassination doctrine. Make no mistake and let it be said again — we are next. The onslaught has already begun. It's a question of conscience: Freedom means respecting the voice of the people — which is democracy.

Peter Koenig is an economist and geopolitical analyst. He is also a former World Bank staff and worked extensively around the world in the fields of environment and water resources. He writes regularly for Global Research, ICH, RT, Sputnik News, the Voice of Russia / Ria Novosti, TeleSur, The Vineyard of The Saker Blog, and other internet sites. He is the author of Implosion — An Economic Thriller about War, Environmental Destruction and Corporate Greed — fiction based on facts and on 30 years of World Bank experience around the globe. He is also a co-author of The World Order and Revolution — Essays from the Resistance.