Ukrainian Military Tries to Mobilize Disabled Man With No Arms 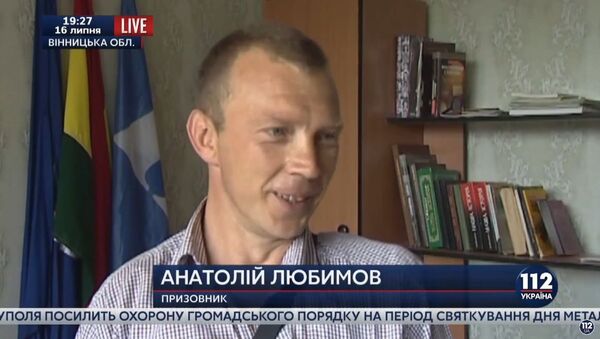 A military draft office in central Ukraine has been forced to apologize after being caught in the center of a minor media firestorm for sending a draft notice to a disabled man who is missing both his arms, Ukrainian news hub Korrespondent.net reports.

The scandal broke out in the Kozyatinskiy district of the Vinnytsia region after a local enlistment office sent a notice of enlistment to Anatoliy Lyubimov, a local man missing both his arms at the shoulder level.

Anatoliy's mother Tatyana described her bewilderment when she came home to find the draft notice. "I come home, and see that a draft notice has come. I said to Tolya, 'you're being summoned to the enlistment office'. I felt such a sense of anxiety for the country at that moment, thinking 'look who they're calling up now.'"

At first, Anatoliy himself thought that the call-up notice was a joke. He had lost his arms nine years ago, and was personally acquainted with the local commissioner, who he said knew about his disability.

Kiev Fails to Provide Soldiers With Military Training, Sends Them to Death
Nevertheless, having received the notice, Anatoliy decided that he would turn up at the enlistment office, appearing before the medical commission which decides if a person is fit for military service. "My draft notice was immediately taken away, so that no one ever sees it again. It was annulled," Anatoliy noted.

Authorities at the draft office were forced to apologize for the ridiculous mistake. "We send out draft notices to people in connection with the sixth wave of mobilization," deputy commissar of the Kozyatinskiy enlistment office Leonid Shkur told reporters. Anatoliy demanded that the enlistment office get its affairs in order, and stop sending summons for service to people who are clearly unable to serve.

Ukraine's sixth wave of mobilization, launched on June 18 in connection with Kiev's continuing military operation against independence supporters in Donbass, is set to continue until mid-August. Ukrainian authorities had plans to call up between 100,000-150,000 men to the military in 2015, with President Poroshenko signing a decree in March extending the army's size to 250,000 personnel. Last week, the General Staff of the country's Armed Forces extended the period of service for the third wave of mobilization, conscripts who were called up last September, to October 31.

Farewell to Arms: Over 10,000 Soldiers Desert Ukrainian Army
Each new wave of Kiev's mobilization effort has met with mass resistance from the country's young men. Dodging the draft, including by hiding from officials in relatives' homes and fleeing abroad (mainly to Russia, where an estimated 1.3 million potential conscripts were earlier estimated to reside), has turned into a mass phenomenon. Authorities have reacted by threatening harsh jail terms for the draft dodgers, and by expanding the draft age to include men up to 60 years of age.

The necessity to draft young men to serve in an unpopular war has led to problems for the military itself. Last month, Ukrainian news hub Vesti reported that over 10,000 conscripts have deserted from the Ukrainian army since the beginning of the conflict in April 2014. Moreover, an analysis by French magazine Nations Presse suggested that some 50,000 conscripts are actually incapable of combat for medical reasons, with many of the rest effectively serving as "cannon fodder" due to lack of proper training. Earlier this week, an entire tank battalion hit the news after going AWOL, stating that they would refuse to take orders from their command, and urging the president to deal with widespread corruption and lawlessness in the army.

Entire Ukrainian Tank Battalion Goes AWOL, Refuses to Take Orders From Kiev
In April 2014, Kiev launched a war against self-defense forces in the regions of Donetsk and Lugansk which had rejected the outcome of the Maidan coup d'état of February 2014. The UN has estimated that the war has already caused 6,500 casualties, both military and civilian, although a German intelligence report from February 2015 suggested that the true number of deaths could be up to ten times higher – claiming the lives of up to 50,000 people.
Newsfeed
0
Access to the chat has been blocked for violating the rules . You will be able to participate again through:∞. If you do not agree with the blocking, please use the feedback form
The discussion is closed. You can participate in the discussion within 24 hours after the publication of the article.
To participate in the discussion
log in or register
loader
Chats
Заголовок открываемого материала