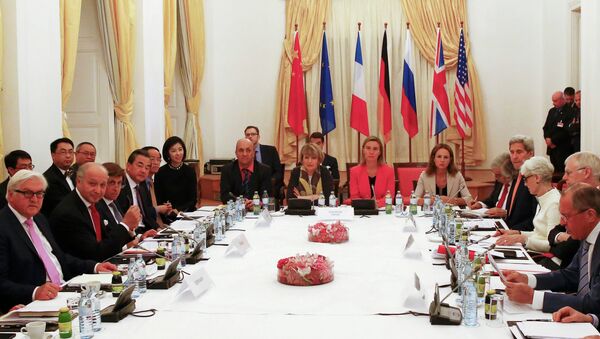 Andrew Korybko
All materials
The Iran deal, despite having an expected shelf life of at least 10 years, might be prematurely cut short by an incoming Republican President.

The long-awaited deal on Iran’s nuclear program has brought the world a collective sigh of relief, with individuals the world over sincerely glad that the issue has finally been settled…or has it?

Shifting Alliances? Iran Nuclear Deal to Hurt US-Saudi, Israeli Relations
While the vocal opposition from Israel and the Gulf Monarchies is well known, they’re not in any sort of position to directly affect the agreement’s implementation.

That rests solely with the signatories to the agreement, all of which are assumed to be acting in good faith. It doesn’t seem likely that the Obama Administration would endanger the deal’s success (after all, it forms a crucial component of the President’s legacy and he’s invested too much political capital in it), but the same can’t be said when a new administration comes to power in January 2017.

If that President just so happens to be a Republican, then all the months of negotiation and meticulous detail that has gone into the deal could be put to waste quite suddenly, and it’s disturbingly easy to do.

So why would a Republican President want to ruin the deal for everyone? Here are four probable reasons:

The new leader might seek to carry through on their campaign platform if the topic becomes a crucial component of their electoral success and enough anti-Iranian hate can be whipped up prior to that.

But then again, politicians don’t typically keep their campaign promises (remember Obama’s vows to close Gitmo and end the ‘War on Terror’?), so it’s doubtful this would be the sole motivating reason behind the decision.

For as much as talk as there is about a so-called ‘US-Israeli rift’, it’s actually just a strategic illusion, and the two countries still remain quite close in all spheres (despite the purposely misleading diplomatic theatrics).

The US and the Gulf Monarchies are also on great terms no matter what the commentators say, as the tens of billions of dollars of arms contracts profoundly attest.

With Republicans stereotypically being more open about their support of Israel and the Gulf States than their Democratic counterparts, it’s conceivable that such a President might immediately scuttle the deal so as to reinforce the US’ alliance with those two in the most grandiose and symbolic manner possible.

Should the UNSC sanctions be lifted as planned within 90 days of the UNSC’s expected December endorsement of the Joint Comprehensive Plan Of Action (JCPOA), then it’ll be a free-for-all economic bonanza in Iran.

China May Rise as Major Exporter of Iranian Oil After Nuke Deal
Major economic actors from all over the world will rush into the country to make as much money as possible, with Russia, China, India, and the EU leading the way and likely squeezing the US out of the most prized ‘rewards’.

The resultant economic jealousy may prompt the new President to sabotage the whole framework and force the re-imposition of UNSC sanctions (which will be talked about in the last section) to put everything on hold, although the document stipulates that the return to such measures won’t be retroactive.

The JCPOA agreed to earlier this week specifically addresses the need for the US to remove all financial sanctions as well as those imposed on the “purchase, subscription to, or facilitation of the issuance of Iranian sovereign debt, including governmental bonds”, among other numerous provisions. Should Iran let the impending financial windfall get the best of its strategic senses and it invests too disproportionately in the US and/or allows the US to quickly buy up a sizeable share of its government debt (as China has done to the US), then it could be in major trouble if a Republic President comes along.

If unilateral and/or multilateral sanctions are re-imposed (and as just touched upon, it’ll later be described how the US can force the international community to reapply the latter as per the JCPOA’s own provisions), then the US could once more freeze Iran’s financial holdings in the US and/or try to sell all of the sovereign debt that it owns at once, which if in large enough of a quantity, could lead to a destabilization or outright collapse of Iran’s fragile, recovering economy.

The Devil’s In The Details

So what does a Republican President have to do to ruin the Iranian deal? Not much, actually. As summarized from the “Dispute Resolution Mechanism” outlined in Chapters 36 and 37 from pages 19-20 of the JCPOA, here’s how the escalatory process would look, and keep in mind that all the US has to do is be obstinate the whole time:

Iran or any of the E3/EU+3 countries (in this case, the US) would have to lodge an official complaint that one of the sides isn’t properly complying with the JCPOA.

It might be the US making unfounded accusations against Iran, or Iran rightfully being upset that the US President unilaterally issued an Executive Order decreeing new sanctions (which is how the US has instituted them many times in the past).

After that, the Joint Commission would have 15 days (or longer if agreed by consensus) to resolve the issue, during which time they may refer it to the Ministers of Foreign affairs “in parallel with or in lieu” of their responsibilities.

If the issue still can’t be concluded, a three-member Advisory Board would have 15 days to issue a non-binding opinion on the matter.

The Commission will have no more than 5 days to consider the Advisory Board’s opinion, and if the problem still isn’t settled, then the complaining participant has the right to “cease performing its commitments to the JCPOA in whole or in part and/or notify the UN Security Council that it believes the issue constitutes significant non-performance.”

Here’s where it get messy and the US can really screw things up for everybody. It’s at this point that the UNSC would “vote on a resolution to continue the sanctions lifting”, and if it’s not adopted within 30 days, “then the provisions of the old UN Security Council resolutions would be re-imposed, unless the UN Security Council decides otherwise.”

If the US escalated the situation all the way to this point, then it would obviously veto the attempt to continue lifting sanctions and as well as any subsequent one to decide against their automatic re-imposition.

Although “the provisions would not apply with retroactive effect to contracts…prior to the date of application”, the damage would definitely be done, since it’s then written that “Iran has stated that if sanctions are reinstated in whole or in part, Iran will treat that as grounds to cease performing its commitments under this JCPOA in whole or in part.” It doesn’t matter if they’re unilateral American sanctions (which could be the catalyst for this entire process) or the multilateral UNSC ones that the Republican President might want, once sanctions return, the deal is dead.