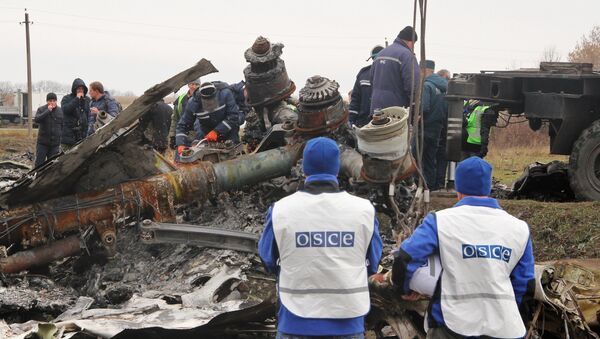 © Sputnik
/
Go to the mediabank
Subscribe
International
India
Africa
Ekaterina Blinova
All materialsWrite to the author
A year has passed since the downing of Malaysia Airlines flight MH17 over Ukraine, but are we a step closer to finding out the truth about the hideous tragedy?

World
MH17 Most Likely Shot Down by Air-to-Air Missile
On July 17, 2014 Malaysia Airlines flight MH17 came down near Donetsk in eastern Ukraine en route to Kuala Lumpur from Amsterdam killing all 298 people on board.

What happened next still raises questions: although an official investigation had not even been launched, Washington and a chorus of Western media sources had immediately pointed the finger at Russia and eastern Ukrainian rebels.

According to a preliminary report by the Dutch Safety Board, the Malaysia Airlines flight broke up in the air most likely as the result of structural damage caused by "a large number of high-energy objects that penetrated the aircraft from the outside."

However, the dominant narrative propagated by Ukrainian and Western media sources insists that it was eastern Ukrainian independence fighters backed by Moscow, who shot down the doomed Malaysian flight. Washington and Kiev claim that the plane was brought down by the Russian-made Buk missile, ignoring the fact that the independence fighters had no weaponry of that kind.

"The Dutch Government's Safety Board will in October make public its long awaited report detailing its assessment of last year's downing of Malaysia Airlines flight MH-17 over Ukraine. The investigation was conducted with the cooperation of the Ukrainian and Malaysian authorities, but did not include a thorough survey of the crash site, which was and still is considered too dangerous," Philip Giraldi, a former counter-terrorism specialist and CIA intelligence officer, noted.

Dutch Authorities Turn Down Request for UN Probe Into MH17 Disaster: Agency
The former CIA officer suggested that although there is no hard technical or intelligence related evidence regarding who was behind the downing, the report will nevertheless contain an assumption that pro-Russian independence fighters are "the most likely suspects."

Indeed, a US mainstream media source has recently reported that the final investigative report on the MH17 crash will lay the blame for the tragedy on Donbass independence supporters, and, partly, the carrier itself. 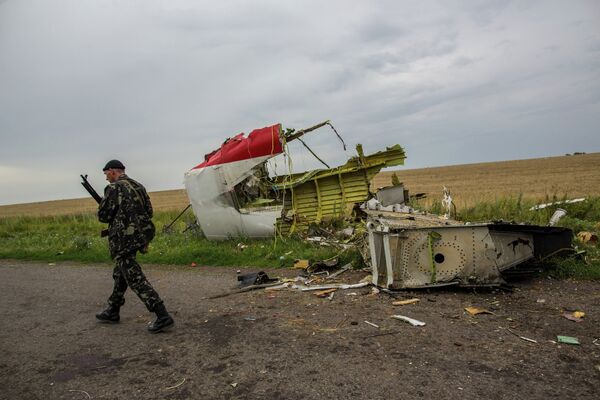 Still there is something very fishy about the investigation. First of all, Washington has refused to release data from satellites in the area of the crash, although Moscow has repeatedly asked the US to publicize this information. There is no doubt Washington has detailed images of the site, experts say, since the US uses most advanced satellites floating around the Earth.

US Will Not Provide New Information on MH17 Crash in Eastern Ukraine
In August 2014, American investigative journalist Robert Parry reported that US intelligence officials believed that it was Kiev, and not the eastern Ukrainian independence fighters, who shot down Malaysia Airlines flight MH17 on July 17, 2014.

In particular, "[d]espite US spy satellites positioned over eastern Ukraine, US intelligence agencies have released no images of a Buk system being transferred by Russians to rebel control, shipped into Ukraine, deployed into firing position and then being taken back to Russia," Parry underscored.

According to former CIA officer Philip Giraldi some US intelligence analysts suspect that either the Ukrainian government or former governor of the Dnipropetrovsk Oblast Ihor Kolomoisky is responsible for shooting down the transport plane. Both Israeli-Ukrainian national Kolomoisky and the Kiev regime had the resources and motive to shoot the MH17 flight and then put the blame on the breakaway Donbass region and the Kremlin, the former CIA officer stressed. 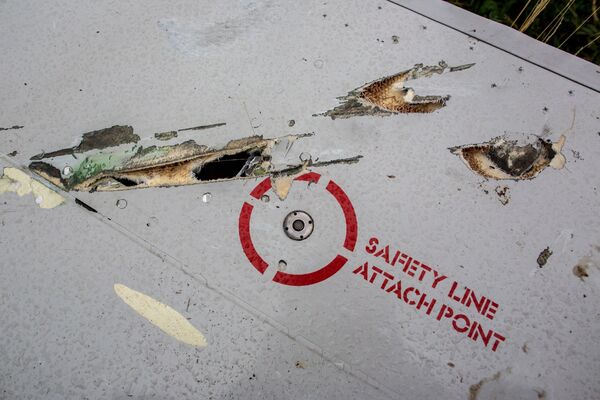 At the same time, the German BND intelligence service has also expressed its doubts regarding the involvement of Russia and eastern Ukrainian rebels in the tragedy. It is worth mentioning that German experts also called into question the authenticity of photos provided by Kiev as part of the investigation.

Ukrainian Combat Jet Returned Without Missiles After MH17 Crash: Reports
While the investigation goes on the West also persists in ignoring the version that the MH17 could have been brought down by an air-to-air missile. This version emerged in August 2014, when Russian Air Force chief Lieutenant General Igor Makushev reported that Russian radars had detected a second aircraft in close proximity to the infamous MH17 just before the crash, stressing that it was most likely a Ukrainian fighter jet.

Earlier this week the Russian Investigative Committee announced it had data that the Malaysia Airlines flight MH17 was most likely shot down by an air-to-air missile, adding that the weapon was manufactured outside of Russia.

"Regarding the priority version, we have data, including the one based on the results of examinations, [that suggests that] the plane was shot down by an air-to-air missile… Moreover, experts believe that they have established the type of missile and this is not a Russian-made missile," committee spokesman Vladimir Markin said Wednesday. 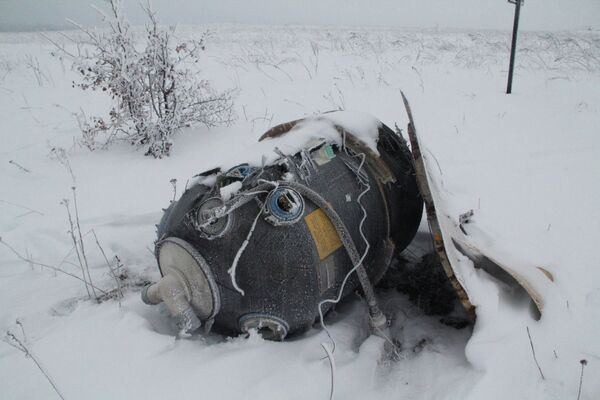 In addition to ignoring evidence presented by their Russian counterparts, the West demonstrates little if any willingness to cooperate. There is something sinister about the fact that the Russian specialists had been excluded from the MH17 crash investigation and only "occasionally" were given some information about the probe. According to Russia's Permanent Representative to the UN Vitaly Churkin, Russian experts "are barred from these cases, and only occasionally are they given some information about how the investigation is going."

Regardless of the fact that the Dutch Government's Safety Board will make its final announcements on the matter in October, Australia, Belgium, Malaysia, the Netherlands and Ukraine have hastened to push ahead a joint proposal to the UN Security Council to establish an independent tribunal aimed at prosecuting those responsible for the catastrophe. 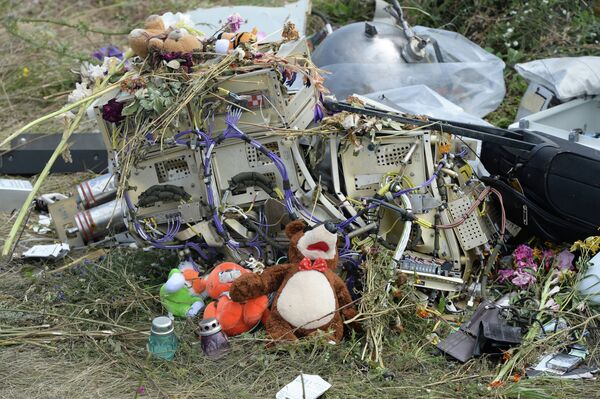 UNSC Resolution to Create MH17 Crash Tribunal May Not Yield Impartial Probe
Some experts believe that such a move is aimed at disrupting the ongoing process of the investigation seeking to propagandize Russia's fault without any evidence. Indeed, it would be far more logical to set such a tribunal when the investigation is over, experts say.

So far, the Russian Foreign Ministry has denounced such a proposal as counter-productive, referring to the UNSC resolution 2166 "that ensures a full, thorough and independent investigation into the crash and demands that those responsible be brought to justice."

Russia has a good reason for rejecting such a hasty move by the Western countries, US geopolitical analyst Eric Draitser told Sputnik.

"Russia is absolutely correct to reject the notion of an international tribunal for MH17 because recent history has demonstrated that the very mechanism of "tribunals" is a political weapon wielded by the US and its western allies. Rather than a means of discerning truth, the international tribunals allow the West to assign blame for events as it sees fit, thereby controlling the narrative and the writing of history on a given issue. The US especially has demonstrated almost from the first day after the MH17 tragedy that it was intent on absolving Kiev and blaming Russia for what happened, making it anything but impartial on the issue. And the fact that Washington has blocked any truly inclusive independent investigation into the incident in my view demonstrates that, for the US, MH17 is an opportunity to cement the discredited narrative of "Russian aggression" more than anything else," Eric Draitser underscored.

Although the investigation has been carried out almost for one year, we are still far from unveiling the true story of the hideous tragedy of July 17, 2014. The question remains open, who benefits from hiding the truth and politicizing the issue?