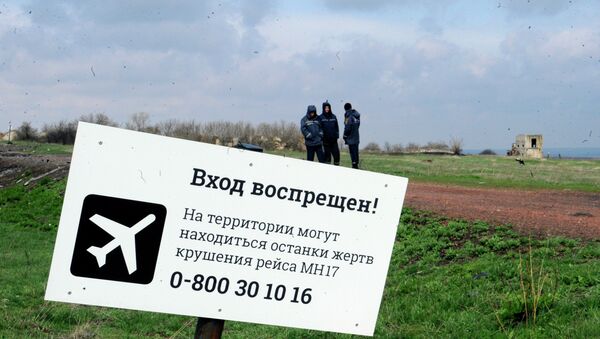 Donbass militia did not down the Malaysian plane with a Buk-M1 missile, as radars would have registered the launch. Kiev left airspace over Donbass open because of greed and not wanting to lose money, which led to the death of 298 people, the deputy director of the Federal Air Transport Agency said.

MOSCOW (Sputnik) – The fatal Malaysian Airlines plane could not have been downed by a Buk-M1 missile from territories controlled by east Ukrainian militia because Russian radars would have pinged it, the deputy head of the Russian Federal Air Transport Agency said Thursday.

“I would like to emphasize separately that, according to specialists, if a missile was launched from Zaroschinsky [under Kiev control], [Russian] radar stations would not have fixed the launch or the missile’s flight toward the aircraft. At the same time, if the missile was launched from the region of Snizhniy [under the control of east Donbass militias], as many in the West claim, then according to all of the experts and specialists, this would be reflected in the [southern Russian] Rostov radar locators,” Oleg Storchevoi said.

MH17 Most Likely Shot Down by Air-to-Air Missile
Russia has never pushed forward its version of the MH17 plane crash in eastern Ukraine, but has only suggested taking all of its information into consideration, he added.

Malaysia Airlines flight MH17, en route from Amsterdam to Kuala Lumpur, crashed near Donetsk in eastern Ukraine in July 2014, killing all 298 people on board.

Russia is the only country so far to reveal information it has on the MH17 plane crash, he said.

Russia is prepared to conduct metals analysis alongside specialists from any country of the rocket that brought down the MH17 plane in eastern Ukraine, he said.

“We have high quality equipment, including equipment to conduct metals analyses that can define the type of metal that the destructive elements were made of, as well as the exact make of the rocket. We are ready to conduct any type of investigation alongside specialists from any country. We have nothing to hide.”

The Russian Federal Air Transport Agency believes the calculations by specialists who published their conclusions into the downing of the MH17 plane with air-to-air missiles to be competent, the agency’s deputy head said.

“I saw a report was published by a group of aviation specialists who calculated the angles of damage, the size and the possible weight of the damaging elements and on this basis, they proved that the plane could have been hit only with a foreign air-to-air missile because Russian missiles don’t have these characteristics. I can say that the calculations that are given in the document are very competent. It’s obvious that these people have in-depth expert knowledge and experience in investigating disasters.”

Kiev did not close the airspace over eastern Ukraine because of greed and because it did not want to lose money, which led to the downing of the MH17 plane last year, Oleg Storchevoi noted.

“The Russian Federal Air Transport Agency has already sent its disagreements and comments to the Netherlands. They obviously cannot publish these and they can’t be published until the final report comes out,” Oleg Storchevoi said.

“We will, of course, be ready to give detailed explanations after the publication of the document, moreover, since we have something to say in this regard. But during the time before the official publication of the report comes out, new additional proof that I hope would help in the objective investigation into the reasons for the Boeing catastrophe may appear,” Storchevoi said.

Russian Experts Excluded From MH17 Crash Investigation - Envoy to UN
He said that no one has the right to comment on the report until it is published.

Russia does not have full access to the materials in the investigation of the MH17 plane crash, Oleg Storchevoi said.

“Only careful work in studying the smallest of details can define what the reason was for the aircraft’s crash.”