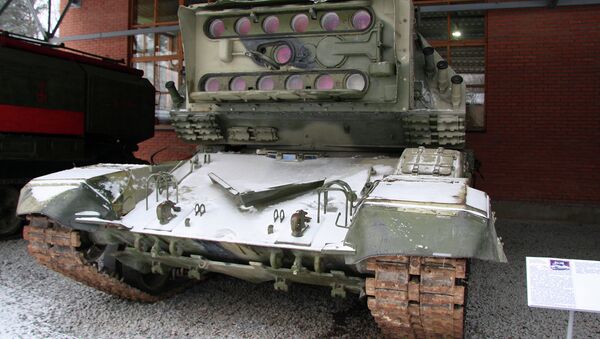 Multipurpose Laser-Guided Rocket Homing System Developed in Russia
During the closing years of the Cold War, the USSR tried to make that part of science fiction come true and it worked, but not too well.
In its May 28, 2015 article the state-run Rossiyskaya Gazeta newspaper hinted that Russian engineers were now working on similar laser weapons “without advertising it.”

By the mid-1970s, the Soviet Union was eagerly pursuing laser weapons on land, at sea, in the air and in outer space as a useful counter to US and Western European optics, missiles, spy satellites and other high-tech systems.

In 1982, it built the first full-size prototype of an energy weapon for a ground vehicle and installed in on a tracked chassis.

The first laser tank was born.

“Creators of the wonder-weapon began thinking about what to call their development so no one would guess anything and, most important, so there also was no mention of a laser,” the Moscow-based Rossiyskaya Gazeta noted.

“They called it a portable automated sighting device, designated the vehicle the 1K11 and dubbed it the Stilet —   or Stiletto. It was meant to burn out enemy cameras, scopes and seekers,” it added.

Far more impressive was the 1K17, which boasted a far more powerful multi-channel laser on a T-80 tank chassis. A dozen individual lenses amplified the main beam as huge batteries allowed the vehicle to fire multiple “shots” in rapid succession.

“[The] laser guns … were capable of burning out all enemy optics within direct line of sight in fractions of a second,” the newspaper wrote. “When there was contact with enemy armored vehicles, Soviet laser tanks simply would blind them, making aimed fire impossible,” Rossiyskaya Gazeta wrote.

The energy beam would have twice the range of a normal tank gun.

In 1992, the first prototypes rolled out of the factory, but the economic chaos in the wake of the Soviet collapse forced the government to cancel the program.

“But one high-ranking official of the Yeltsin government once publicly let it slip that platforms were practically ready,” Rossiyskaya Gazeta noted. “The technology has not been lost.”

“There are a handful of areas … where, theoretically, Soviet-era engineering remains competitive on today’s battlefield,” retired US Army Major Ray Finch,  -  an analyst at the Army’s Foreign Military Studies Office , —  wrote in the June 2015 edition of OE Watch.