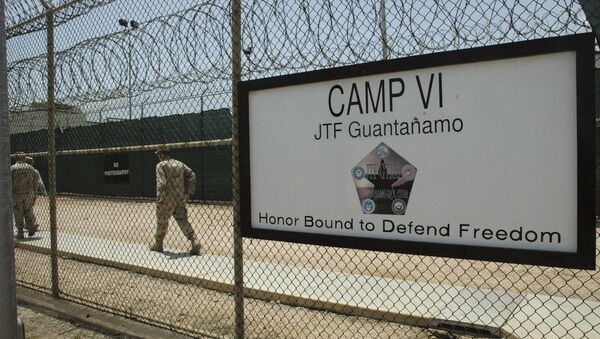 Hunger Striking Gitmo Prisoner Cleared for Release
MONTEVIDEO (Sputnik), Diana Cariboni – The judicial process for the release of video footage capturing force-feeding practices at the US Guantanamo Bay detention camp is a "political show-off" to create an illusion of US government compliance with the law, former Gitmo detainee Jihad Deyab told Sputnik.

"I have the last word on the releasing and I have not decided yet," 44-year-old Deyab, held in extrajudicial detention at Guantanamo for 13 years and now in Uruguay, said on Wednesday stressing that the force-feeding videos would be released if he gives his consent.

Deyab, a naturalized Syrian born in Lebanon, was allegedly subjected to about 1,300 force-feedings at Guantanamo. He was the first Gitmo captive to have civilian justice officials order the US military to stop force-feeding him.

Several media outlets, including The New York Times and The Guardian, have sued to obtain the release of video capturing Deyab’s force-feeding, adding to the demand that had previously been made by the lawyers of Gitmo prisoners.

"I will ask that they [court] give me the edited version and only then will decide," Deyab told Sputnik, explaining that the videos show his "personal suffering" and that he is "the only one entitled [to allow their release], since I [Deyab] was the involuntary protagonist of those tapes though I never could watch them."

Last week, US District Court Judge Gladys Kessler urged the US government to stop delaying the publishing of more than 30 videos capturing 11 hours of Deyab being force-fed.

Former Guantanamo Prisoner Granted Temporary Residence Permit in Estonia
According to the former Guantanamo detainee, the whole judicial process with the videos is a "political show-off" including "media denounces, hearings, judicial rulings the government must be bound to" just to "pretend" that authorities "obey the law and due process." If that process had been truthfully followed, Deyab told Sputnik, Guantanamo "would have never existed in the first place."

Deyab was released from Guantanamo in December 2014. In October 2014 Kessler ordered the publication of videos capturing his force-feeding, but the US government appealed the decision and an appellate court returned the case to the judge. Now the judge says authorities must publish a first tranche of five hours of recordings before August 31, but the decision may be appealed in court a second time.

Deyab told Sputnik that he signed an agreement with his lawyers in this regard "so they can’t do anything without my consent" and has asked for the US government to return "writings, drawings and paintings" he did while in Guantanamo.

Guantanamo: 'Obama Has Disappointed Many People'
Jihad Deyab was one of the Guantanamo captives who participated in the February 2013 hunger strike and one of the four dozen captives who was being force-fed at the detention facility. According to Deyab, the most common practice was to insert a tube through the nose of the prisoners.

Deyab’s lawyers submitted a motion requesting an end to force-feeding in June 2013 on the grounds that it was cruel and unusual treatment.

Deyab told Sputnik that Guantanamo guards beat him until he fainted every time there was news of the judicial process regarding the force-feeding.

The Guantanamo Bay detention facility, located in Cuba, is the subject of harsh criticism by human rights groups, governments and media since its establishment in 2002. Health workers, inspectors and former detainees have described the conditions at the camp as cruel and inhumane, reporting the use of torture.

US President Barack Obama has repeatedly stated that he would close the prison, but the facility remains operational.