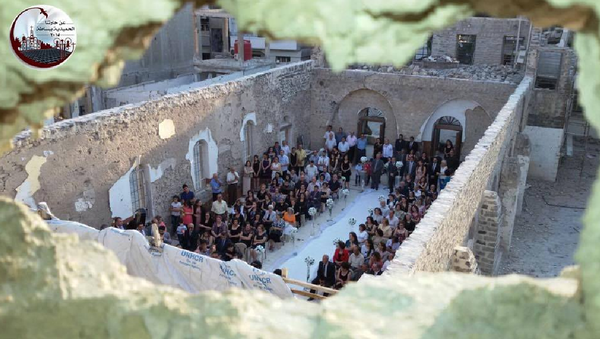 As Syria's gruesome civil war enters its fifth year, Syria in so many ways seems unlivable and yet people continue to find ways to live.

On the Facebook page titled ‘With the simplicity of our street Al Hamidi’ there are photos of a wedding in the war-torn ruins of the Church of St. George on the street Al Hamidi in the Syrian city of Homs.

The photo album shows a Christian wedding of a young couple who despite all hardships decided to tie the knot in their home town.

The album was titled with the following lines, “Congratulations to Fadi Saud and Ranu Makhoul, who have become one family. We wish you a life full of health, love and happiness. Your first step as a family took place in such a great location.”

The astonishing resilience of the Syrian people, who came to join in the wedding celebration of the young couple, shows that despite the continuous battle and horrible destruction, civilians continue to live on and hope for peace.

The album of the wedding also reads, “Without further comments, pictures speak for themselves on this good wedding. See the photos and pray for their well-being.”

The post received wide distribution on social media and generated many subscribers who wrote posts like: "Congratulations! We are stronger than all the difficulties.”

The war has now led to more than 4 million Syrians fleeing the country.

The recent report released by the United Nations estimates that an additional 7.6 million Syrians remain displaced within the country — meaning that roughly half of all Syrians have been forced from their homes since the war broke out in 2011.