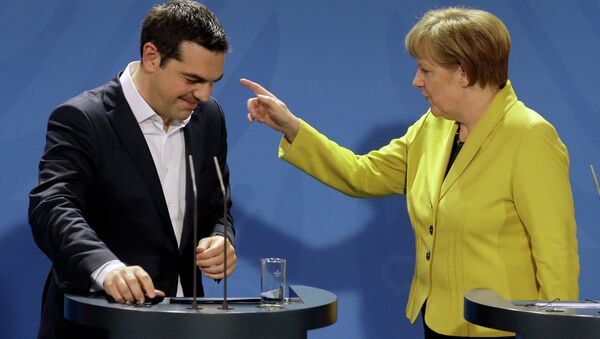 Germany has shot itself in the foot by persuading Greece to accept its new highly unpopular bailout deal and now "Europe as it is, is over," according to Tyler Durden, an analyst for the financial website Zero Hedge.

The Italians, Spanish, and French anxiously watched how Germany and the Troika twisted Greece's arm in an Italian mob-style, Tyler Durden, an analyst for the financial website Zero Hedge pointed out, adding that the EU as it is, is over now.

"The Germans just made their biggest mistake in a long time (how about some 75 years) over the weekend. Now, when all you have to bring to a conversation slash negotiation is bullying and strong arming and brute force, that should perhaps not be overly surprising. But it’s a behemoth failure all by itself regardless," the analyst noted.

Domino Effect: Greek Officials Opposed to Bailout Deal Will 'Have to Leave'
The author underscored that Greek Prime Minister Tsipras failed to introduce an alternative currency in Greece and has ultimately given in to the Troika not because he lost his nerve, but because he was actually "made an offer he couldn't refuse."

In other words, the Troika was ready to turn Greece into a "failed state."

The analyst pointed to some of Tsipras' remarks he made after the new deal had been concluded.

"We took the responsibility for the decision to avert the most extreme plans by conservative circles in Europe… We resisted demands for the transfer of state assets abroad and averted a banking collapse which had been meticulously planned… I promise you that as hard as we fought here, we will now fight at home, to finish the oligarchy which brought us to this state," Tsipras stated.

Frenemies? Greek Opposition Wants Prime Minister Tsipras to Stay in Power
Germany has obviously cut its own throat by undermining the trust of the EU member states which were closely watching the negotiations. Berlin's era of economic strength is now over the hill, since "without trust you have nothing," the analyst underscored.

It goes without saying that "the people here in Greece are being forced to pay for years for something they were never a part of, and that they never profited from." Their profits went to Germany-backed investment banks and Greece's corrupt elite. Such a business model is doomed, according to the author.

Indeed, Greece's creditors have completely ignored the results of the Greek national referendum, turning a deaf ear to the plea of the people. The new bailout agreement concluded between Athens, Germany and the Troika can be called a "full colonization" of Greece by the West, Dimitrios Patelis, professor at the Technical University of Crete, noted.

This mob-style way of doing business is a distinguishing feature of the "fascist capitalism," US publicist Eric Zuesse underscored in his article earlier this week. "This is not democratic capitalism. It is not socialism. It is, instead, fascism. It is dictatorial capitalism," he stated.

On Monday, the Eurozone leaders agreed to provide Athens with a three-year 86-billion-euro loan to bolster the Greek economy in exchange for tough reforms to the country's pension system, VAT and labor laws.