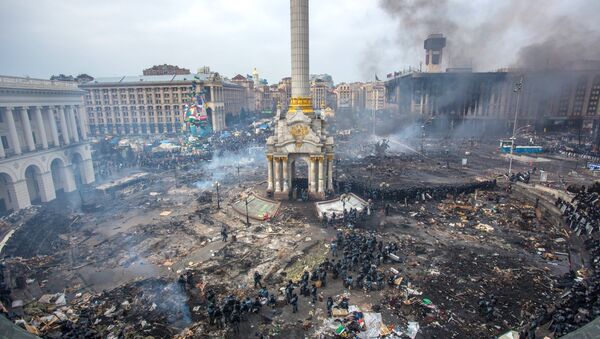 © Sputnik / Andrei Stenin
/
Go to the photo bank
Subscribe
Kiev authorities are in panic as activities of the "Right Sector" are out of control and may form a "second front," which will mobilize its forces against the current government, Sueddeutsche Zeitung wrote.

Recent armed clashes between members of the Right Sector and the Ukrainian police caused panic among Ukrainian politicians. Many of them fear that this incident may be the beginning of a strong uprising which may lead to a third Maidan.

"'Perhaps this is a turning point in the history of Ukraine. Tomorrow or the day after tomorrow this will sound as follows: Volunteers against the state. This is extremely serious," a Ukrainian official told Sueddeutsche Zeitung under condition of anonymity.

The bloody incident in the west of the country, indeed, raises possibility of a military confrontation with the Ukrainian government, Sueddeutsche Zeitung wrote. According to journalist Cathrin Kahlweit, volunteers from the Right Sector are mobilizing their forces. If Kiev will not take corresponding measures, it is possible that the country will face a "Third Maidan."

Maidan Revolution Spreading Across Ukraine – Russian Lawmaker
Such possibility is especially realistic if other battalions and angry citizens in the country will join the Right Sector, the journalist wrote.

Armed clashes between fighters of the Right Sector and the local police took place on July 11 in the town of Mukachevo in Transcarpathian region. Three people were reportedly killed and 13 injured during the incident.