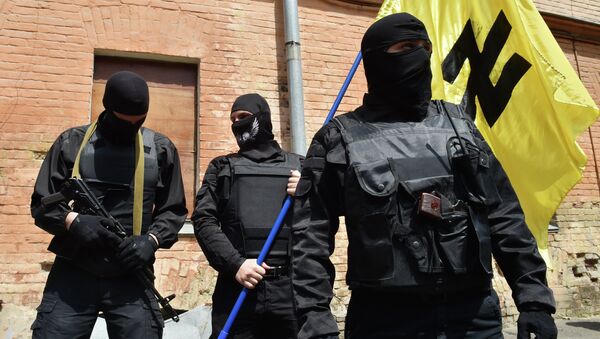 The Right Sector nationalist movement has been actively used by the Ukrainian government during its offensive against militia forces in the east. The war in Donbass can be ended only when illegal armed groups, especially the Right Sector, are disbanded, Andrej Hunko, a Bundestag member from the Left Party, thinks.

Right Sector Activists Launch Protests in Kiev
As Ukraine is still ravaged with the war against self-defense forces in the east and plagued with political and economic turmoil, the Right Sector extremist movement is wreaking the havoc across the country.

Kiev is taking advantage of using the Right Sector in the Donbass conflict, and the war can be stopped only when all illegal armed groups are disbanded, Andrej Hunko, a Bundestag member from the Left Party, told Sputnik.

"After the last year’s coup, a number of armed groups, especially the Right Sector, are still active in Ukraine. […] All attempts to put so-called volunteer battalions under government control have failed because they simply refused to obey any orders," Hunko says.

Despite being a non-government formation, the Right Sector has been actively involved in fighting in Donbass since the beginning of the Kiev-led military offensive there in April 2014.

The expert also underscores that the political influence of the Right Sector has often been underestimated, especially in Europe.

"Here, in Germany, especially in the west, the role of the Right Sector has always been underrated since the radical movement has never been successful in elections. In fact, Ukrainian far-right radicals have adopted the strategy of creating their own institutions and incorporating into law enforcement and security bodies," Hunko claims.

"In part, this goal was achieved. I can’t give specific numbers, but assume that there are thousands of them," he adds.

Since the Right Sector and other armed groups are active not only in Donbass but also in Odessa and the Zakarpattia Region, it is obvious they weaken the government authority and especially the position of Ukraine’s President Petro Poroshenko, the lawmaker says.

Right Sector Will Not Lay Down Arms by Poroshenko’s Order
"Such formations have a great political influence. Now we know that the Right Sector plans to redeploy its forces from Eastern Ukraine to Kiev and hold mass protests to put pressure on Poroshenko. It is clear that such groups influence politics even with their existence," Hunko says.

The involvement of heavily-armed Right Sector fighters in the Donbass conflict has persistently buried hopes for the peaceful settlement.

"The Right Sector rejects the Minsk peace agreements, especially the provision on the dissolution of illegal armed formations and their integration into legal structures. That did not happen," the expert says. "Now we see a conflict brewing up between Poroshenko and armed nationalist groups. In addition, Poroshenko is rapidly losing support among Ukrainians. It is a terrible situation, but I hope that the West will wake up and see what is actually happening in Ukraine."

"Kiev used Right Sector fighters as far back as during the maidan protests. They were the armed force. Right Sector has also played a major role in the Kiev-led offensive against Donbass residents who were discontented with the coup. The Ukrainian army of itself is weak, and the mobilization is being delayed. Ordinary people do not want to be killed in this fratricide war. This is why the government needs Right Sector supporters fighting for their Nazi ideals," Hunko states.

Having started collaborating with the Right Sector for the Donbass war, the Ukrainian government is now in some kind of a trap. On the one hand, Kiev needs radicals to wage the war, on the other the Right Sector discredits Ukraine for its Western partners.

"There a lot of differences between the government and the Right Sector. Kiev seeks support from the EU and wants to be recognized in the international arena. It is no surprise now the difference are getting obvious," the lawmaker states.

"There is no way back to peace for Ukraine without disbanding Right Sector," he says.

"However, it is hard to believe that Kiev has political will to implement the Minsk accords. The Right Sector must be disbanded. A constitutional reform was presumed to give Donbass a special status. That has not been done. Now Donbass plans to hold elections apart of the rest of Ukraine. Unfortunately, all of the above does not look like the Minsk agreements coming into effect," Hunko concludes.

The differences between the Right Sector members and Kiev came in full force last weekend over a conflict in the western Ukrainian town of Mukachevo. On Saturday, Right Sector members exchanged fire with local police. The incident left several people killed and 13 injured, including law enforcement officers. The attackers ran away and hid in the mountains.

The Right Sector was formed as a coalition of nationalist and neo-Nazi organizations during the Maidan protests in Kiev at the end of 2013. In November 2014, Russia’s Supreme Court blacklisted the Right Sector as an extremist organization and banned its activity in Russia. Earlier, Russia launched a criminal case against leader Dmitry Yarosh for public incitement of terrorism.