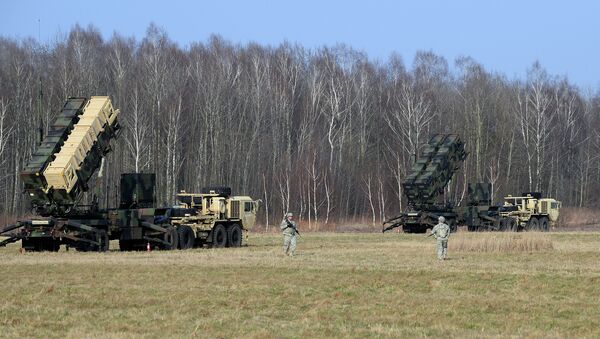 © AFP 2021 / JANEK SKARZYNSKI
Subscribe
NATO’s desire to build up its missile defenses despite Monday’s breakthrough deal with Iran means that the entire idea of the US missile shield in Europe is based on lies, Alexei Pushkov, the head of the State Duma’s foreign affairs committee, said on Tuesday.

US Still Rejects Missile Defense Deal With Russia After Iran Nuclear Deal
On Tuesday, Iran and six leading world powers signed a comprehensive plan for ending international sanctions against Iran in exchange for putting restrictions on its nuclear program.

Commenting on the breakthrough agreement clinched in the Austrian capital, Russia’s Foreign Minister Sergei Lavrov said that during a 2009 speech in Prague US President Barack Obama said that if such an agreement were signed the proposed US missile shield in Europe would lose its relevance.

Still, an unnamed NATO representative told the media on Tuesday that despite the agreement on Tehran’s nuclear program the missile threat to NATO remained, adding that the alliance’s missile defense program had in mind “all types of threats from outside the Euro-Atlantic region.”

“The entire strategy of the proposed US missile shield in Europe is based on lies,” Alexei Pushkov said in comments aired by Rossiya-24 TV on Tuesday.

“First, they talked about the missile threat from Iran, even though Tehran had neither missiles nor reasons for such an attack. Then they talked about the imaginary threat posed by North Korea, which is on the other side of the globe. And now they are talking about some 30 countries which are allegedly threatening to fire missiles on Europe. When asked to name at least a dozen such states, they tell us that this is classified information,” Pushkov added.

“NATO officials come out here as plain hypocrites and liars, because their proposed missile shield is actually aimed against Russia’s nuclear deterrence. Hating to admit this, they resort to outright lies,” Alexei Pushkov said in conclusion.

On Tuesday, following months of talks, Iran and the P5+1 group, comprising Russia, the United States, the United Kingdom, France, Germany and China, reached a final agreement aimed at guaranteeing the peaceful nature of the Iranian nuclear program.

The Joint Comprehensive Plan of Action (JCPOA) acknowledges Iran's right for peaceful nuclear development on par with any other signatory to the nuclear Non-Proliferation Treaty.