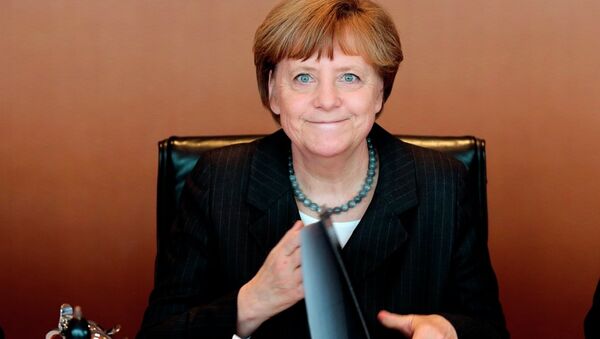 © AP Photo / Markus Schreiber
Subscribe
There are growing calls for a boycott on German goods and services over the Greek bailout crisis, after critics said Berlin was pushing for regime change in Athens.

Thousands of people have turned to Twitter and other social media calling for German goods and services to be shunned after what critics say is an unfair ultimatum to the Greek Government, which has been ordered to push further austerity measures through parliament by Wednesday evening, or risk no further financial aid.

Social media has been buzzing with criticism that Germany has bullied Greece into the tough bailout package, with critics saying Berlin has forced Athens into a brutal series of tax rises and pension reforms in return for a further bailout.

The hashtags #ThisIsACoup #StopBuyingGerman #BoycottGermany have all been heavily trending on Twitter since Monday night.

One tweet said: "At best, you should boycott everything made in Germany – computers, bicycles, coffee filters, toothpaste etc."

Another tweet, under the hashtag #SupportGreece called for people to buy everything produced in Greece: ouzo, olive oil and feta cheese.

Loved my holiday in #Greece. Great people and amazing places. Everyone needs to go, they need you! #supportgreece pic.twitter.com/bTfjwESHQN

There is widespread anger at the way Germany has dominated the Greek bailout crisis, forcing German fiscal policies on another Eurozone member, with critics describing the talks as a "mental waterboarding" and "crucifying" of Greek Prime Minister Alexis Tsipras.

The leading Nobel laureate economist Paul Krugman blogged: "This Eurogroup list of demands is madness. The trending hashtag #ThisIsACoup is exactly right. This goes beyond harsh into pure vindictiveness, complete destruction of national sovereignty, and no hope of relief.

"It is, presumably, meant to be an offer Greece can’t accept; but even so, it’s a grotesque betrayal of everything the European project was supposed to stand for," Krugman wrote.

000000
Popular comments
From wine to cheese i buy everything BRICS, plenty of yogurt from Greece
lianasammartino
14 July 2015, 16:45 GMT
000000
Sadness. This is what happens to countries that threaten to leave the Euro. A brutal lesson to those countries already trapped and hopefully, those who are considering joining.