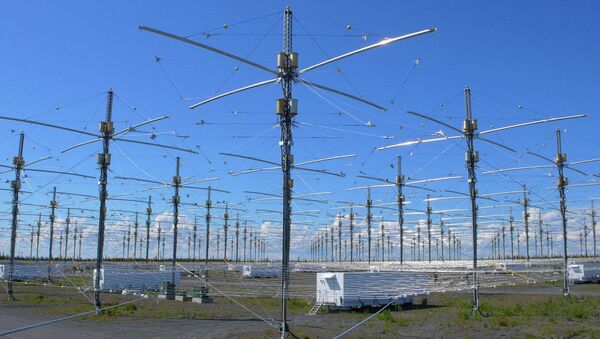 © AP Photo / Mark Farmer
Subscribe
International
India
Africa
Control of a US Air Force research lab in Alaska – which has been the source of multiple conspiracy theories, from weather control to human mind manipulation – will be transferred to civilian authorities next month.

In August, the High Frequency Active Auroral Research Program (HAARP) will be handed over to the University of Alaska, an Air Force spokesperson confirmed to the Intercept.

"The Air Force Research Lab has control of the HAARP facility until Aug. 11," Marmian Grimes, a University of Alaska spokesperson, wrote in an email to the Intercept.

Located near Gakona, Alaska, HAARP is home to 360 radio transmitters and 180 antennas, which generate radio waves that heat up the ionosphere – a region of the upper atmosphere – by accelerating electrons, allowing scientists to conduct experiments.

HAARP was dreamed up during the Cold War to study whether currents of charged particles traveling through the ionosphere could be used to send messages to nuclear submarines deep underwater.

After the end of the Cold War, HAARP supporters proposed other uses, like examining ways to detect underground facilities in countries like North Korea. But that plan was scrapped, just like a 2002 plan by the Pentagon to use HAARP to study ways to counter nuclear bombs.

To debunk conspiracy theories that HAARP was a classified military facility, the Air Force invited the public to view the facility during annual open houses. But the speculation persisted, including an accusation that HAARP caused the massive 2010 earthquake in Haiti.

The Defense Department spent nearly $300 million over two decades to build the site, which was finally completed in 2007. Less than seven years later, the Air Force announced it would close and dismantle the facility as federal funding had dried up.

Following the transfer to the university, HAARP will operate as a scientific facility supported by those conducting experiments there.

Physicist Dennis Papadopoulos, of the University of Maryland, told the Intercept that the state of Alaska will contribute about $2 million, while additional funding may come from the National Science Foundation and the Pentagon.