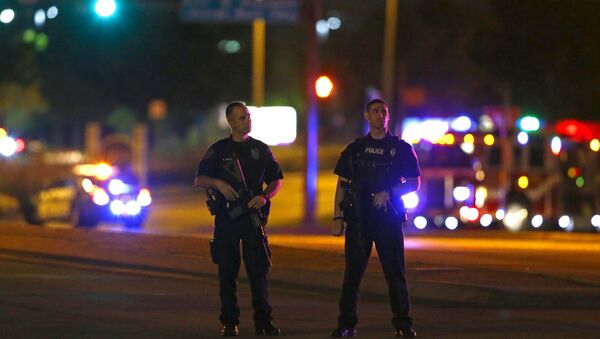 © REUTERS / Mike Stone
Subscribe
International
India
Africa
The killing of an armed man by an Austin, Texas police on Saturday continued to be investigated.

“The most recent officer-involved shooting that occurred over the weekend is an open and ongoing investigation, and we are not releasing any new information at this time,” Bremner said on Monday.

On Saturday, officer Patrick Cheatham killed local resident David Lepine after a officers had gone to his home to interview him when a woman issued a complained that Lepine, 62, had been following her.

Assistant Police Chief Brian Manley said Lepine was shot after fleeing to the side of his house and seen pulling something from his shorts. A gun was found at the scene.

Austin Hotel Gunman Shot and Killed by Police
The police said this is the 14th murder in Austin of 2015, and all officers involved in the shootings have been put on paid administrative leave.

Lepine had a criminal history including assault with intent to murder a police officer, according to published media reports.

The killing of Lepine comes a week after Austin police shot dead two other men on July 5, 2015, media reports said.

Michael Holt, 35, was shot in an incident in the lobby of the Omni Austin Hotel Downtown in Austin. Police said they believe Holt had previously shot dead a 60-year-old taxi driver with a rifle he had brought into the lobby.

Also on July 5, police killed Richard Munroe, 25, after he pointed a BB gun at police. Police later said they believed Munroe was suicidal.

Lepine’s death was the sixth fatal shooting by Austin police in 2015.

Austin now ranks fourth among all US cities in the number of people killed by police this year, according to a database maintained by the British newspaper The Guardian.