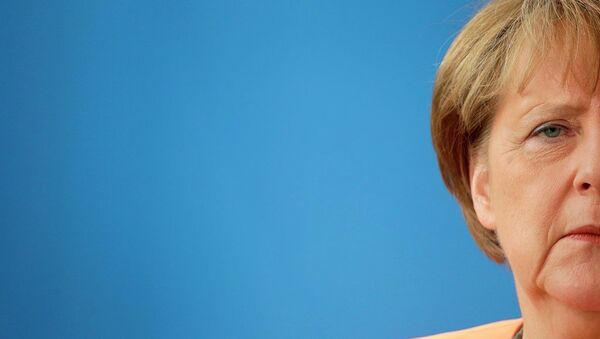 © AP Photo / Michael Sohn
Subscribe
International
India
Africa
Once the euro was a "trump card" proposed to Germany by France and other members of the European Community to help it start the reunification after the fall of the Berlin Wall. Now, Germany has forgotten lessons of the past and is seeking to establish a hegemony in Europe and force other countries to follow its decisions, Politico wrote.

The 1990s were an important period in modern European history, when political leaders who had experienced at least one of the world wars initiated by Germany, sought to establish a peaceful and unified Europe. Their desire was to create a European Germany, not a German Europe, as it was stated in 1953 by the German writer Thomas Mann.

Politico’s author Gustavo Cardoso wrote in his article that European countries are now taking apart Greece’s financial difficulties and mistakes, but failed to prevent Germany from using its power, which makes Europe too German and Germany less European.

German Media Condemns Merkel for Hypocrisy Towards Greece
According to him, Germany’s hegemony is one of the main factors of the current crisis in Greece and in the EU as a whole. Germany has been imposing its preferences on the rest of Europe. However, instead of bringing stability, the German approach has contributed to the crisis and created an essentially unstable situation.

In his article, Cardoso cited Hans Kundnani, author of the book “The Paradox of German Power”. According to Kundnani, events which have taken place since the beginning of the euro crisis in 2010, to a large extent can be explained by the transformation of national identity and the German economy, which occurred during the two decades between the reunification of the GDR and FRG and the euro crisis itself.

“In other words, Germany today, as in the period 1871-1945, is strong enough to try to impose its will, but at the same time is not strong enough to do it,” Cardoso wrote, referring to Kundnani.

However, as Germany’s exported rules do not work, one is increasingly facing the need to create new coalitions to try to resolve the existing conflict situation, and thus is forced to return to the dynamics of coalition building between the great powers in Europe before 1945.

Cardoso suggests that one needs a German referendum on the issue of membership in the Eurozone.  This would help to restart the European dynamics and induce the current Germany to return to a clear path of European integration, he wrote.