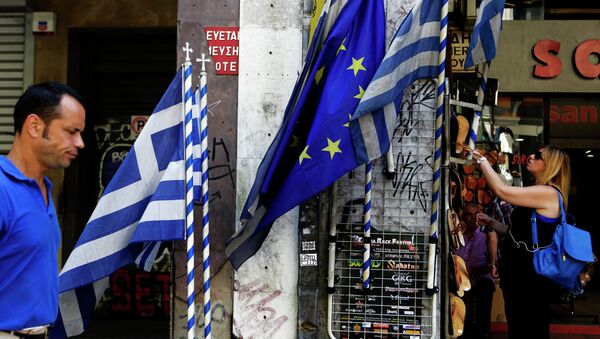 © AP Photo / Petros Karadjias
Subscribe
Draft Eurogroup agreement includes a recommendation for the European leaders to propose Greece to engage in talks on a temporary exit from the eurozone with possibility of debt restructuring.

Earlier in the day, the eurozone finance ministers met in Brussels to discuss the Greek debt crisis and find possible solutions to it.

"In case no agreement could be reached, Greece should be offered swift negotiations on a time-out from the euro area, with possible debt restructuring," the conclusion part of the agreement reads.

'Dictatorial' Capitalism: Greeks Must Pay While Investment Banks Got Paid
The July 5 referendum, in which the Greeks voted against the bailout deal, sparked a new wave of speculation about Athens’ possible exit from the eurozone.

Earlier on Sunday, French President Francois Hollande ruled out the possibility of a temporary Grexit.