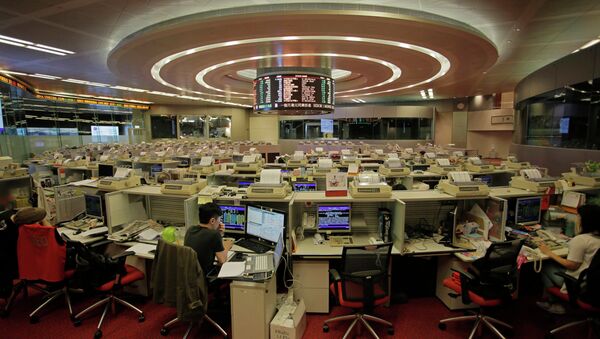 China’s stock investors are fleeing the mainland, buying into foreign properties in attempts to preserve their wealth, provoking dire consequences for the Communist nation’s economy by further weakening domestic consumer demand, as evidenced by the slump in prices for luxury cars.

Kristian Rouz — After mainland China's stock markets have erased roughly a third their valuation in a matter of a month, the nation's rich are increasingly choosing to offshore their wealth, buying into properties in advanced nations, most prominently, in Australia, the UK and Canada. Although real estate markets in these particular nations are already hot with inflated prices amidst an overwhelming demand, China's wealthiest are desperate for any kind of safe haven assets as gloomy investment prospects in the mainland are effectively pushing capital abroad.

Power of Gold: China Establishes Its Largest Gold-Investment Fund
Meanwhile, within China's boundaries, the demand for luxury is bottoming out as evidenced by the stunning absence of demand for high-end automobiles, previously rife in the mainland.

According to Reuters data, the real estate market in Sydney, Australia has experienced an influx of investment money from the mainland in the past month. Australia's property market is preparing for a further surge of Chinese investment in properties as the bourses in Shanghai and Shenzhen are still under too much downward pressure.

"There's a huge amount of cash sitting in China and I think you'll find a lot of that comes to the Australian property market," Michael Pallier of the Sydney-based Sotheby's International Realty said.

As evidenced by Bank of America Merrill Lynch data, from the beginning of this year, Chinese investors withdrew some 360 bln renminbi ($58bln) from the mainland's stock market in the ongoing record sell-off, compared to only a half of that figure (190 bln renminbi) during the entire year in 2014 and some 100 bln renminbi on average in each year prior to that.

Amidst more evident safe-haven assets are US Treasuries, Deutsche Bunds and hard currencies. Albeit more liquid, all of these assets are still financials in nature, and, given the Chinese investors are once bitten, twice shy with financial markets, they prefer something more material these days, like gold or real estate.

According to some estimates, investors originating from mainland China have bought some $5 bln worth of properties in the US in 2015 thus far, compared to the $4 bln worth of real estate the Chinese purchased during 2014.

China’s Stock Crash Poised to Flip Over Global Finance
While wealth is fleeing the mainland, luxury goods are meeting less demand within China, as evidenced by the commenced decline in prices for high-end German automobiles. Not so long ago, China was one of the world's biggest importer of high-end cars, but now, according to statements by the local retail branch of BMW, the carmakers have to offer significant discounts in attempts to halt the slump in sales.

Among reasons for the decline in luxury sales are not only the overall economic slowdown and stock collapse, but also the anti-corruption efforts, undertaken recently by the government in Beijing. Another factor is that the nation's central bank imposed strict monetary regulations, severely limiting the profitability of grey banking schemes.

"The business has been slow for the last 18 months, but lately we have had to discount even more," an anonymous representative of a local car dealership said. "When people walk into a showroom now, with anything less than 15 percent discount they would not even consider opening their wallets."

The Chinese retail business of Daimler AG shrunk by 20% to 30% just over the past month, dealerships reported, while earlier this year sales in Mercedes-Benz automobiles grew by 21.5%.

In line with the pessimistic market reports, the China Association of Automobile Manufacturers (CAAM) cut its 2015 forecast in car retail sales from the previously promising 7% to a dismal 3% now. Adding to the overall anxiety, certain car retailers halted hiring new personnel, indicating possible layoffs are not such a distant perspective.

The accelerated capital flight is significantly impairing Chinese domestic consumption, not so long ago being the focal point in Beijing's strategy to readjust the national economy towards a more sustainable growth. All in all, as China is getting substantially poorer, hopes for a successful economic transformation are evaporating.